Photographers commonly place UV filters on the front of their camera lenses in order to protect the glass front element. Aside from preventing dust buildup, the filter also takes the brunt of any impact seen by the front of the lens. If you have to have some glass shatter, you’d rather it be a relatively cheap filter compared to an entire lens, right?

But how easy is it to damage or destroy the front element of a lens? Photographer Richard Choi had the opportunity to find out a few years ago when he found a bricked lens on his hands.

When his copy of the lens completely stopped working, Choi did some research and found that it would have cost the price of 2 new lenses in order to repair that single old one. Once he had ruled out salvaging it, he decided to use the dead glass to satisfy his curiosity. The question he wanted to find the answer to was, “how fragile is Canon glass?”

After doing some initial stab tests with a plastic pen, Choi brought out the big guns and started whacking the glass with a metal hammer. The 1.5-minute video above shows what happened. 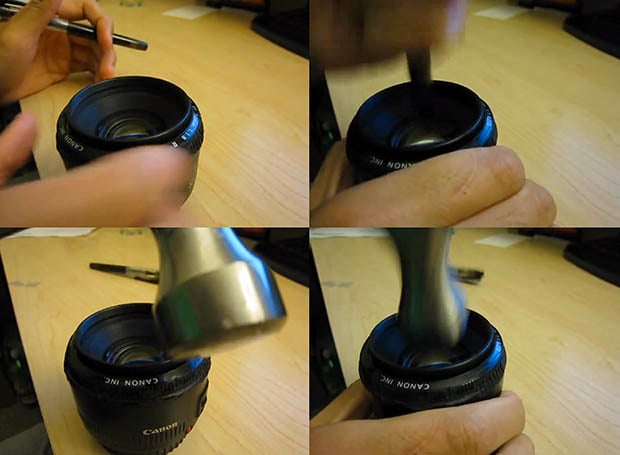 Basically, the violence didn’t do much damage. Even after forceful whacks with the flat and sharp parts of a hammer, the front element’s glass only showed some slight scratches on the coating — not bad for a “thrifty” lens.

Choi was impressed with the durability, but notes that lenses with large surface areas on the front glass are probably more susceptible to cracking/shattering.