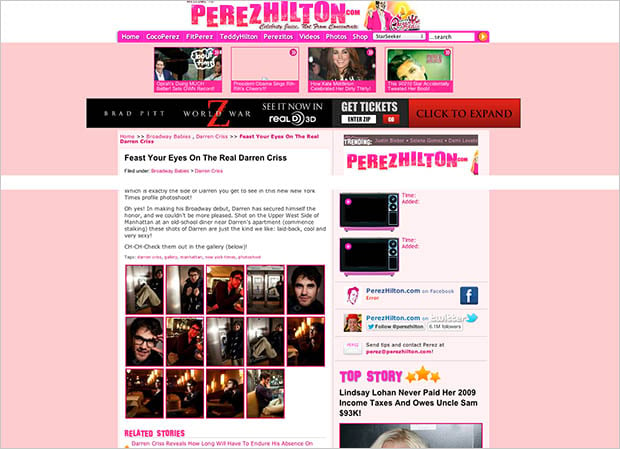 Freelance photographer Robert Caplin filed a copyright infringement and DMCA violation complaint on June 26, 2013 against Mario Armando Lavandeira, Jr., aka Perez Hilton. Hilton is best described as an Internet gossip blogger, who has been known to appropriate copyrighted images and then “transform” them by drawing captions, tears, or other scribbles, and thereby claiming “fair use.”

His well-trafficked entertainment blog sells advertising to support itself. Caplin is a regular contributor to the New York Times, Wall Street Journal, Los Angeles Times. He also runs The Photo Brigade, is a prolific Instagrammer, and is an all around great guy. And I don’t like to see Perez Hilton stick it to great guys.

In other words, it was unambiguous that the images were not in the public domain, and would require permission to use them elsewhere. Further, Caplin had enabled PhotoShelter’s “Image Theft Guard” feature which disables right+click or dragging of images to copy them to the desktop. 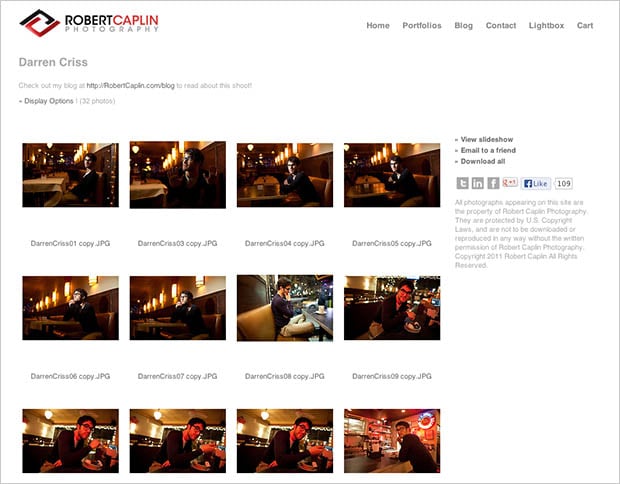 Lavandeira circumvented these controls by screen grabbing fourteen of the images, removing the copyright notices and applying his own watermark to the images. So Lavandeira:

Rather than immediately taking a litigious position, Caplin called Lavandeira and spoke to him directly as alleged in the complaint. Lavandeira allegedly apologized and agreed to remove the offending images from his website. A reasonable tact with a quick and friendly resolution… except Lavandeira didn’t take down the images.

So Caplin hired the Law Office of Carolyn E. Wright, LLC (aka Photo Attorney) to represent him. Caplin tells us, ”We attempted to resolve the matter prior to filing suit. While Mr. Lavandeira’s attorney acknowledged our effort, we received no other response. My goal with this litigation and with all of my actions is to protect my intellectual property.”

There has been a lot of speculation over what Caplin could gain by taking it to the courts. So what is Caplin due?

The “value” of the damages can be either “actual” or “statutory.” But an actual damage can be notoriously hard to calculate. So let’s start with the statutory.

Thus, Lavandeira could be exposed to statutory damages of up to $2.45 million dollars.

That is FANTASTIC, except no judge in his right mind would ever award that amount. Why? Because even with willful infringement, it’s hard to justify this amount as “reasonable.”

I spoke with Fordham University Professor of Intellectual Property Britton Payne about copyright and DMCA infringement. While it’s impossible to guess at the probable outcome, he does point out that cases like these are usually settled out of court for the simple reason that litigation is expensive.

A 3-month web license for getty runs $49/image. So without even considering a bulk discount, the value of 14 images would be $686. A court might triple the lost license fee as a disincentive for further infringement, so let’s call it $2,058.

Let’s assume Lavandeira 1) generates $10 million in gross revenue per year through the sale of advertising, 2) posts 100 times per day every day. The value that each post brings is $10m / 365 days * 100 posts per day = $274. Even at $20 million in revenues, the value is only doubled to $548, which is pretty close to the calculated licensing fee. 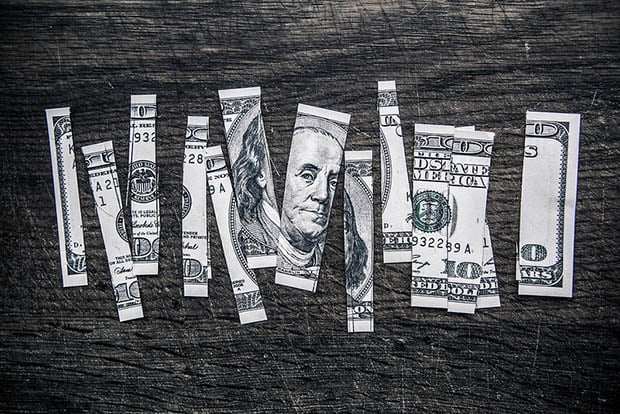 Payne points out that it would be surprising if the case was settlted strictly on the calculated value. All the time and headache to pay off your lawyer and put a few hundred bucks in your pocket makes no sense. A doubling of the amount, say $60,000, would make more sense, but it’s still a far cry from millions. So what’s the end game?

Lavandeira’s inaction made the legal remedy somewhat of a necessity to protect Caplin’s IP rights. And if Caplin is successful in recovering damages, it makes an example of Hilton. But there is no certainty around the award amount, and unless Caplin is really willing to go to court and paying enormous legal fees (which he may or may not recoup), it’s really a gamble.

A negotiated settlement is still the likely outcome, and the party with more patience (and perhaps deeper pockets) stands to “win.” The publicity is great for the industry, but it’s unlikely to translate into more business for Caplin (unless he’s suddenly bombarded with speaking engagements).

We are rooting hard for Caplin in this situation, but given an explanation of the economics, you can see why even seemingly clear cut copyright infringement cases are a financial gamble for individual photographers.

Nikon Wants to Change the Way We Think About Cameras, Making ‘Secret Products’