First Lytro tried to make focusing irrelevant, and now an MIT project wants to make choosing a camera angle a thing of the past.

Aydin Arpa, a reserarcher at MIT’s Media Lab, recently presented a paper on CrowdCam, an app in development that would combine images taken from multiple perspectives into a seamless visual field where you could change the perspective just by swiping your finger on the screen.

The idea is that at any even semi-public event these days, you’ve got dozens of people scattered around the location snapping shots with their cameraphones. Why not use that multiplier effect to make sure you don’t miss out on anything because you’re standing behind a pillar or packed in the crowd like a sardine?

Once the event is over, users would upload their photos to CrowdCam. By computationally comparing images, the app would create a 3D representation of the scene, constructed for easy access via finger swipe.

Arpa and his fellow researchers reference the time-freezing, perspective bending effects in “The Matrix” in explaining the utility of CrowdCam.

“Ultimately, our system enables everyday people to take advantage of each others’ perspectives in order to create on-the-spot spatiotemporal visual experiences similar to the popular bullet-time sequence,” according to their research paper. “We
believe that this type of application will greatly enhance shared human experiences spanning from events as personal as parents watching their children’s football game to
highly publicized red carpet galas.” 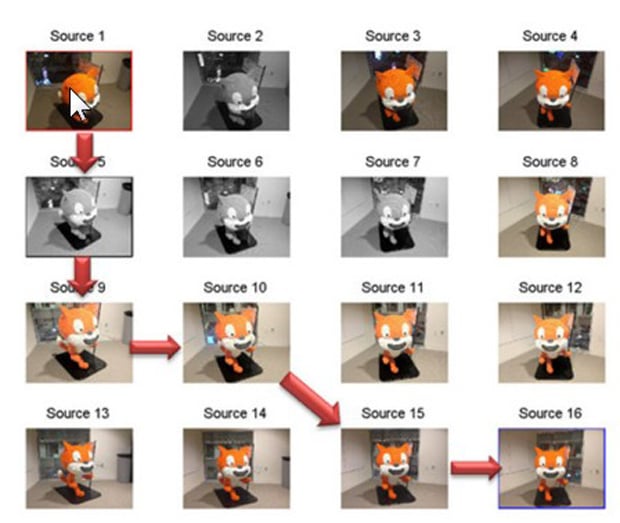 No word on when the app will be ready, but fellow computer vision researchers note it would take a certain density of users for the app to be very useful.