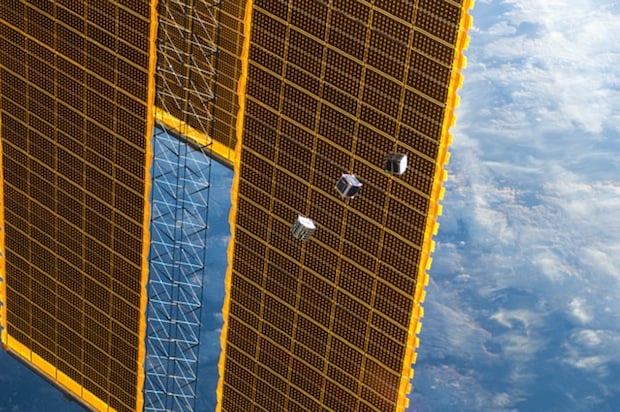 There are a couple of different types of imaging satellites currently orbiting our planet. On one end of the spectrum are specialized satellites that gather very high-resolution imagery in which you can identify objects as small as 3 feet across. On the other are the lower resolution satellites that beam down photos of larger areas.

California company Planet Labs wants to fill the space in-between, by providing an affordable middle-of-the-road option for companies interested in using it. To that effect, they’re planning on launching 28 tiny, mid-resolution satellites called “Doves” into space before the year is out.

The problem with the other options out there is that the high-res satellites are in such high demand that it can take weeks to get your photos, and the low-res satellites are, well, too low-res for what Planet Labs wants to achieve.

The tiny Planet Labs Doves (two of which were already test launched in April) will take and beam down photos of things like traffic, deforestation and the melting ice caps in real time. That info can then be used by interested companies to update online maps or keep track of environmental changes.

And because they’re sending up 28 satellites, the images will update very frequently. Even though the company hasn’t said exactly how frequent that will be, cofounder and former chief of staff for NASA’s Office of the Chief Technologist, Robbie Schingler, was clear about one thing: “it is going to be something the industry doesn’t have today.”

Planet Labs intends to shoot all 28 of the little camera satellites into space on an Antares rocket as early as December, after which they will be released into a “string of pearls” like ring around the Earth at an altitude of about 250 miles. They’re expected to stay like that for 2-5 years before atmospheric drag causes them to fall out of orbit and burn up.

(via Technology Review via Engadget)

Pocket Tripod: A Versatile iPhone Stand that Fits in Your Wallet