Up until now, the use of multibillion-dollar orbiting satellites has been extremely limited to space agencies and companies that, well, require satellites. But here’s a radical idea that could change the future of man-made satellites as we know them.

It’s a Kickstarter project called ARKYD, and it’s intended to be the first publicly accessible space telescope ever.

The project is the brainchild of a company called Planetary Resources, who also aims to build technology that will help humans mine asteroids.

Assuming ARKYD becomes a thing, it can be used by the public as a camera in space, so to speak. That is to say that whoever is allotted time with the satellite can point it where they wish and be all scientist-like. No doubt, this thing will be in high demand. 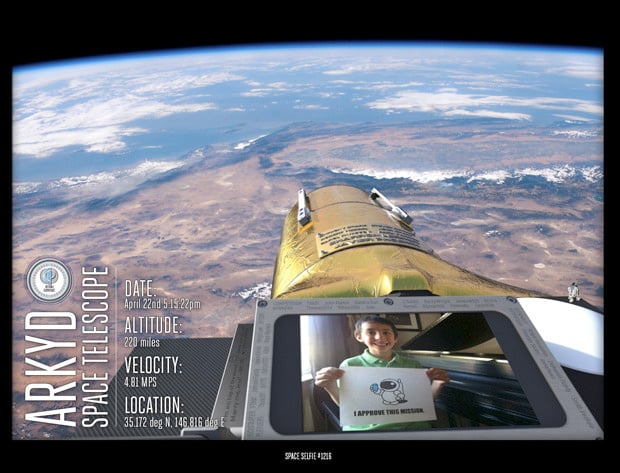 As part of the pledge rewards, this project is allowing anyone who contributes $25 or greater to get a picture of themselves taken with the earth in the background (!). A digital space selfie. There’s apparently a display on this space vehicle, along with an arm with a camera attached to the end. You upload the most appealing photo of yourself, it shows up on ARKYD’s display, and the arm camera takes a picture.

Gimmicky, you say? This is obviously the future. It’s a cute piece of engineering, too, given its small size.

As of this writing, the project is a bit under $50,000 short of its $1,000,000 goal (Planetary Resources says they have additional backing, which is why the they’ve set the goal so low). It expires at the end of the month.

Learn more about this project through its Kickstarter page here.