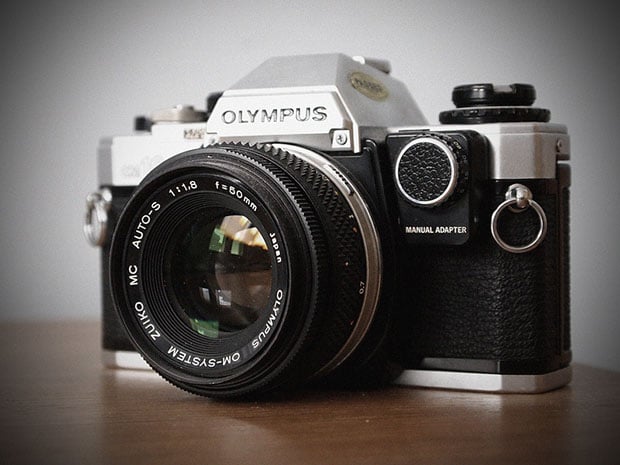 Have you ever wondered why the professional photography industry is dominated by cameras that carry on the design tradition that was started by classic film SLRs?

Early SLR design was dictated by the need to integrate a pentaprism (as well as the abnormally fast and large shutter mechanism for a camera that size). However, as time went by, the SLR design became more ergonomical in nature, easier to grasp and stabilize solely by hand, with the aid of the forward-jutting grip and the sufficiently long lens. Handheld SLRs are many times more stable than rangefinders or viewfinders from the same time period.

When digital cameras first appeared, the available display technology was deficient when compared to the “resolution” achieved by simply projecting the image entering the camera via a mirror into a focusing screen (usually, a round piece of ground glass, although some designs used fresnels) that would then be reflected by a pentaprism (or pentamirror). So, it’s natural that, from the start, DSLRs retained the traditional SLR bodies, with some minor changes, namely, being a little bulkier than regular SLRs, to fit inside all the electronic components.

Even today, any photographer (and videographer) who is worth his salt will prefer looking into the eyepiece than at an exposed display, at least during framing, exposure, and focusing, because incident light on the display (glare) will reflect on to your eye, making it difficult to see what the image actually looks like.

Using a pentaprism still has many advantageous features that make them better than digital displays, although they don’t hold the same degree of truth they did 10 years ago:

Sony’s SLT line of cameras use a modified SLR design: Instead of having a completely opaque mirror, the camera’s use a semi-translucent mirror set at a 45 degree angle. When light hits the mirror, it is directed towards two different sensors: One set directly above the mirror, where the focusing array would be, which is used for phase detection focus and exposure, and the second one behind the mirror, where a normal sensor would be, for imaging.

The SLT design uses the image rendered by the imaging sensor for displaying, dumping completely the optical approach to focusing/framing. Mind you, the SLT line was designed especially with filming and video in mind (which makes them my favorite line of DSLRs), and most, if not all, professional photographers would rather use the regular SLR design with pentaprism.

So, there are three basic reasons we cling to the old SLR design:

About the author: Diego Noriega Mendoza is an amateur photographer and aspiring filmmaker based in Mexico City, Mexico. You can find him on Twitter and Facebook. This article originally appeared here.

Pro Tip: Never Ask a Professional Golfer to ‘Aim for the Camera’

We Forget Everything: A Film About the Preciousness of Photography