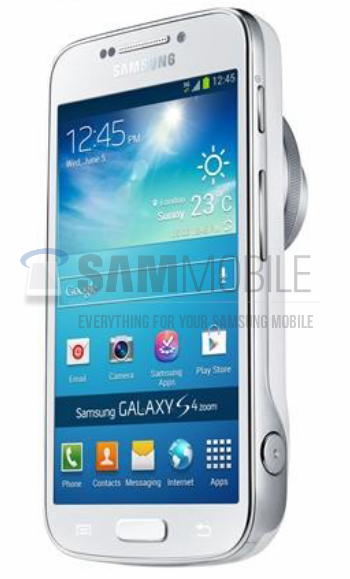 With a mechanical shutter and a 41-megapixel PureView sensor, the leaked pictures and video of the upcoming Nokia Lumia phone codename “EOS” have caused quite a stir.

Nokia, however, isn’t the only one that knows how to spring a leak when it comes to high-end smartphone cameras. Samsung also has a high-level camera phone up its sleeve, called the Galaxy S4 Zoom, and yesterday marked its first significant leak.

The leak comes from two different places: SamMobile and TechTastic have both put up images that seem to show a phone that is as much camera as it is anything else. The SamMobile picture (top) looks to be an official product shot, while the TechTastic folks seem to have gotten their hands on IRL images of the bad boy: Previous rumors had the S4 Zoom sporting the same 16-megapixel sensor as the Galaxy Camera alongside a 4.3-inch qHD Super AMOLED display and 8GB of onboard storage. The camera is also said to be capable of optical zoom, which the pictures seem to confirm.

Additional info gleaned from the pictures seems to suggest that the phone will have an actual, dedicated shutter button. This will be located below a volume rocker that will serve to control the optical zoom when using the camera. And in case you need any more convincing that this phone takes photography seriously, there’s even a dedicated tripod mount.

Leaks, of course, don’t constitute official information — the specs themselves are still up in the air. But given that there seem to be prototypes lying around, we’ll keep our fingers crossed that this one comes to market soon.

Video: The James Webb Space Telescope and the Future of Deep Space Imagery