There has been a series of devastating tornados in the American Midwest recently, and one of the emerging trends — especially in this social media era — is the hunt for dramatic photographs and videos. Earlier this week we wrote about how one particular filmmaker created a tornado-proof vehicle to capture footage from directly inside funnels.

That filmmaker is backed by the Discovery Channel and has the funds and know-how to do things correctly (i.e. “safely”). On the other hand, there is also a new generation of storm chasers who are getting closer and closer to the storms in ordinary vehicles; the video above is one example of when people take their cameras too close.

The footage was captured yesterday by meteorology students Brandon Sullivan and Brett Wright near Union City, Oklahoma. The description reads:

Brett and Brandon got extremely close to a violent tornadic circulation that produced multiple tornadoes in very close range… The team was hit by inflow jet winds into the tornado and their vehicle received damage as a barn was completely destroyed. A hay bale came barreling across the road and was tossed into their car.. The team is very fortunate to live to chase another day… Incredible storm chaser traffic prevented an escape from the tornado like normal..

In the video, we see the windshield of the team’s vehicle shattered by the debris. We also see Sullivan repeatedly checking the framing on his DSLR as he’s screaming for Wright to outrun the storm: 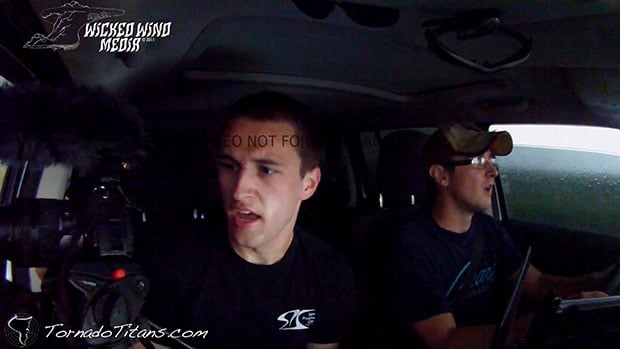 Here’s video footage recorded from the car behind Sullivan’s, which can be seen passing Sullivan’s car in his video:

One problem is that newer storm chasers may not have a grasp on how close is “too close.” Sullivan tells the TODAY show that although they were half a mile away from the funnel itself, they were too close — the winds were still powerful enough to cause major damage.

Another man named Tim was driving home from work when he decided he wanted to approach the storm with his camera (not knowing that a tornado would soon develop):

I was acting silly, Driving home from work, I didn’t think it was really going to be a tornado, but it was, I turned the corner and there it was. I had a kind of gallows laugh and humor, I am an example of what not to do. Please heed warning, go to the basement.

How close are storm chasers getting to the storms they’re trying to capture on camera? Here’s a map captured by storm chaser Justin Hobson and shared over at the Washington Post: 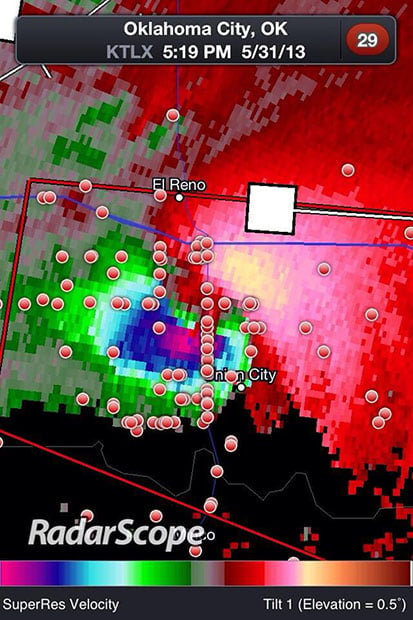 Each one of those red dots is a storm chaser. “Several of them were within the tornado core, demonstrating highly questionable judgment,” the Washington Post writes. The paper calls yesterday, “The day that should change tornado actions and storm chasing forever.”

It points to another storm chaser who got too close yesterday: Mike Bettes, a meteorologist for The Weather Channel. After getting caught in the tornado, their SUV went airborne, tumbling 200 yards from the freeway onto a field. It was all captured on camera:

Ironically, Bettes spoke out two years ago on air about how storm chasers are going too far for dramatic imagery:

An increasing trend I see happening is chasers try to get as close as possible to one-up their competition and cash in on dramatic video. And the one thing I always hear from professional chasers is how safety is their number one concern and warning the public is their number one priority. Me? I call BS on that one. While you’re being hit by debris and being flipped by your car by a tornado, you’re not very concerned about your safety or anyone else’s. You’re setting a bad example for a young generation of chasers who follow your lead.

After miraculously surviving his near-death experience, Bettes posted a message on Facebook saying, “Hopefully our mishap will teach us all to respect the weather & be responsible & safe at all costs. I thought I was doing the right thing, but obviously I wasn’t. Lesson learned the hard way.”

Update: CNN is reporting that three storm chasers were among those killed by Friday’s tornado.

Inexpensive ‘Infragram’ Camera Lets You Take a Peek at Photosynthesis

Blast From the Past: High Quality Color Footage of New York City in the 1930s