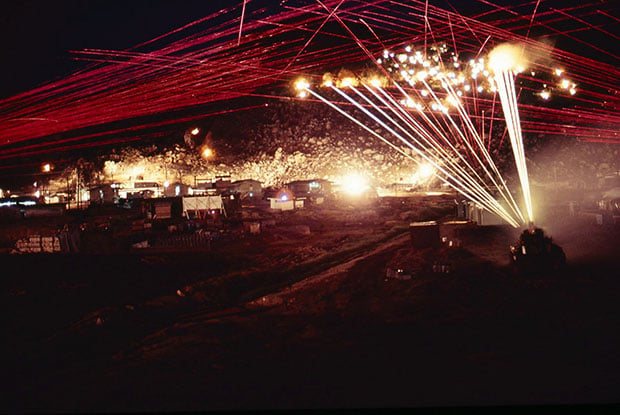 In April of 1970 I was near Phu Tai, Vietnam in the 173rd Airborne Brigade Admin Compound. We were pissed off at taking Viet Cong sniper fire from the mountain above us several nights in a row. The guy would stand up from behind a rock and blow off a clip from his AK47 on full-auto. The sniper was shooting at such a high angle that most of his rounds came through the sheet metal roofs of our hooches. We decided to use a “heavy” response the next time(s) the sniper hit us.

Over the course of a week, I shot two rolls of Kodachrome II (ASA 25) time exposures using a cable release and resting the camera on sand bags in a perimeter guard tower. I used a 35mm Nikon FTN with a 50 mm f/1.4 lens. Most of the exposures were from 15 seconds to one minute in duration. I mailed the unprocessed film home, and didn’t know what I had until I was released from active duty in June. Only recently have I decided to share them. 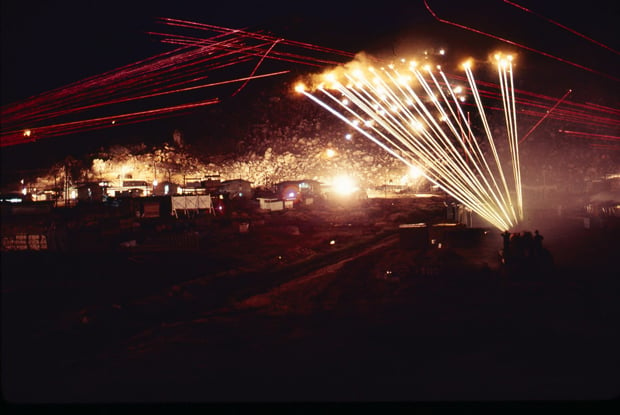 Shooting long exposure photographs of gunfire and fireworks can be tricky. The dark areas need to be exposed enough to provide a setting for the brightly lit events. Being able to see the dark areas puts a perspective to the bright events, and makes a big difference in the effectiveness of the photo.

Since the events are transitory, the shutter needs to be open long enough to acquire enough events to make the point of the photo. In this case a low ASA/ISO helps by preventing overexposure of the dark areas, while still acquiring lots of events.

Of course the camera needs to be absolutely motionless to prevent blur, which is why I rested the camera on a sandbag re-enforced wall. Using a cable release also prevents any jiggle that might be caused by a heavy shutter finger. However, it is still important not to move the cable release while the shutter is being held open because the camera may be jiggled by that too. 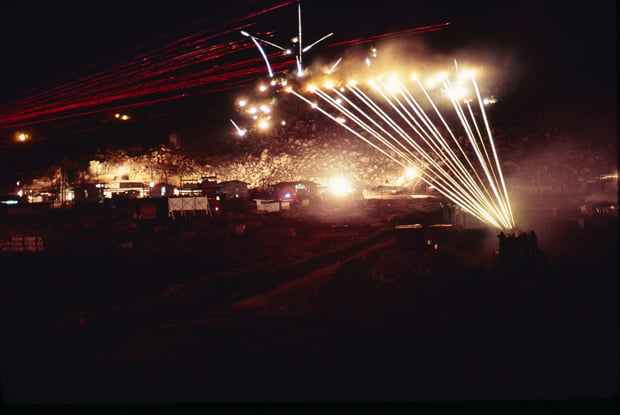 The guns were the same as the familiar navy anti-aircraft Pom-Pom guns. We actually had US Navy manuals for them. The bright white lights at ground level are hand launched parachute flares that had hit the ground and were still burning. You can even see some of the rounds ricocheting off the rocks.

Try that with the camera in your iPhone!

About the author: James Speed Hensinger is a military veteran and photography enthusiast based in Denver, Colorado. Visit his website here.