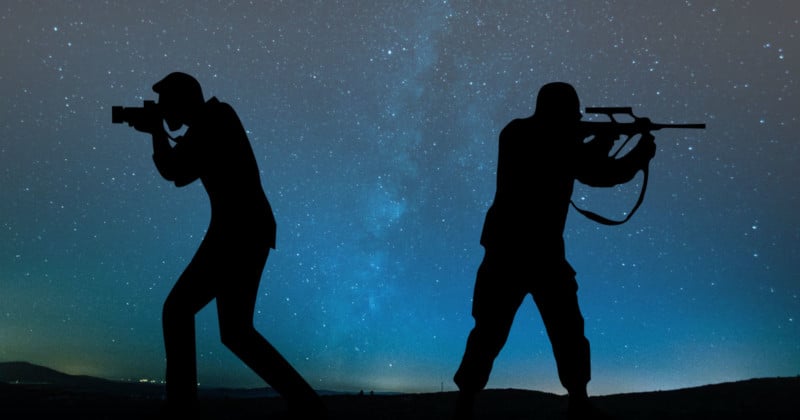 An astrophotographer in Ireland recently caused a strange scare: he was mistaken for a “sniper,” and it resulted in an armed police manhunt.

The night sky photographer was setting up his camera and tripod on a beach at south Kerry bay on March 18th at around 6:30 p.m. when a passerby on the dunes spotted him.

The walker thought the photographer was carrying a rifle around on the beach, so they called the national police force (known as the Gardaí) and reported that a dangerous “sniper” was roaming the area.

Authorities reacted to the alarming report with a dramatic response: armed police offers immediately rushed to the scene, set up roadblocks, and began searching the area for the gunman.

“One local told The Kerryman that the situation steadily ‘got more and more bizarre’ and that at one point Gardaí had entered a pub in the village seeking to borrow a set of binoculars,” Independent.ie reports. “The bar’s staff and patrons were unable to assist but a villager quickly came to the guards’ aid, providing them with a set of field glasses to help in their search.”

In the meantime, the innocent photographer was peacefully shooting the star photos that he had set out to capture, unaware that he was at the center of a manhunt.

When he was finally located, the police realized that there wasn’t actually a danger to the public and the security alert was canceled.

The photographer was lucky that the police decided to investigate first before shooting: less than a year ago, a photojournalist in the US was shot twice by a sheriff who also mistook a tripod for a rifle. The sheriff’s lawyers are arguing that it was the photographer’s fault, and the sheriff was just spared of criminal charges.

Update on 4/3/18: The photographer who was misidentified as a “sniper” has contacted PetaPixel with his account of what happened:

My name is Mícheál Howard. I am the amateur photographer that was mistaken for the sniper in Ireland. I am just after reading your article and am still laughing at the whole situation.

It all happened two weeks ago. Myself and my fiancée and our dog went on a weekend car camping trip to Kerry. In west Kerry they have one of 3 internationally recognized Gold Tier dark sky reserves in the world.

This was our second night on the trip. We had spent the day touring around and sightseeing. Then we went to Derrynane beach and had planned to stay the night to shoot some astro photos. Derrynane bach is part of an estate owned by the Government, similar enough to a national park, just with a big old Victorian house in the middle.

We parked up in the main car park for the beach and I went out to take some sunset photos and my fiancée stayed at the car to read and to put on dinner with the dog. I generally carry my old, big ass, heavy Giottos tripod on my shoulder. I walked around the beach and took a few photos here and there. Here is one of the photos I took, https://instagram.com/p/BhEiLq-gB6e/ . There were maybe 10 -15 other people on the beach going about their own business.

So while I was doing all this, someone, who I can only assume spent the whole day binge watching Homeland or 24, spotted me with the tripod on my shoulder and completely panicked. They called the Estate security and also called the Gardaí (Irish police force).

I went back to the car and had dinner with my fiancée. While we were having dinner the Estate security approached us and asked us what we were doing. We told them I was out taking photos of the sunset and that we were hanging around to do some astro photography. They told us about the strange phone call they had received about a man on the beach with a rifle. They were very nice and presumed it was all a hoax but were just out doing their due diligence. They saw the tripod and put two and two together and got a laugh out of the situation and went back to their station. We thought it was crazy as well but saw the funny side to it. We thought that was the end of it all, neither us nor the Estate security knew that the person who called in the sniper scare had also notified the Gardaí.

It was starting to get dark at this stage and we were the only people left in the car park and in the area, we didn’t see anyone out on the beach. We were sitting in the car having tea and listening to the radio and laughing about the whole story, when a squad car pulled up behind our car and four Gardaí, from the Armed Guards Response Unit, got out, two went around on side and two went around the other side of the car. The Gardaí in Ireland are fairly calm in Ireland and they saw the surf boards on the roof and two of us in the car so they didn’t bother with the weapons.

We got out and they asked us were we aware of the situation. We told them the Estate security had been over to us and told us about the “sniper” and we told them that we assumed that that was me with the tripod. They asked us a few questions and I showed them the tripod and walked around with it on my shoulder to give them a demonstration. Then I showed them the photos and the time stamps, which matched the time of the “sniper” sighting. They all got a good laugh about it and the ridiculousness of the situation. Unfortunately by the time they had left the clouds had rolled in and any plans for astro photography were gone.

It’s only afterwards reading about it in the papers 2 weeks later that we found out about the full scale of the man hunt. They had closed down the whole area and had spent nearly 2 hours searching for the “sniper” and an Emergency Response Unit was called out from Cork City, but they were stood down when they found me.

Overall a hilarious situation, we got a great kick out of it, and its even funnier watching it blow up on the national news papers, reddit and seeing it on Petapixel.

If people want to see more snaps from the “sniper” they can check out my Instagram page or view my portfolio on my website.