When Dzhokhar Tsarnaev, the younger of the two Boston bombing suspects, was discovered hiding in a man’s boat just outside the perimeter police had set up to search for him, the cops took no chances. Rather than sending officers right in and risking injury, they enlisted the help of an impressive aerial camera to confirm his location and then keep watch as police tried to coax him out.

The camera, developed by the FLIR corporation, is called the Star SAFIRE III, and it’s the one behind all of the infrared shots of Tsarnaev in the boat that spread like wildfire all over the Internet this weekend.

Here’s one of those pictures: 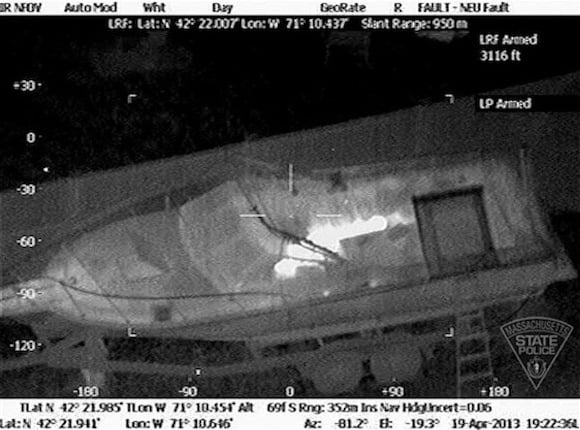 To be accurate, camera isn’t even the right word, FLIR prefers the term “multi-imaging system.” According to Gizmodo, the SAFIRE III is a 15-inch gimbal system that packs a 640 x 480 infrared camera operating between 3-5μm, an optional color zoom camera, a spotter scope, a low-light camera, a 25km laser rangefinder, a pointer, and an illuminator. Like we said, they prefer “multi-imaging system.”

Speaking with Gizmodo, FLIR President Andy Teich explains why the camera was ideally suited for the job it got:

One of the unique capabilities of the camera is … [its] imaging in the midwave region … There are many plastics that become transparent in those wavelengths. And in this case, the boat had one of these shrinkwrap coverings — opaque plastic shrinkwrap covering — and the SAFIRE saw right through that.

After the images had already made the rounds online, the Boston Police Department released this video of the camera at work through the entire arrest:

If you’re thinking you’d like a SAFIRE III yourself, you’re in luck. It’s actually available for purchase by the public, and weighing in at only 100lbs, you can attach it to something as small as a Cessna. You’ll just have to be prepared to spend somewhere in the vicinity of $500K to actually get your hands on it.