Greg Heisler is one of the great photographers of our time, and one of his strengths is meticulously planning his shots. Whether his subject is an NBA player or an olympian, Heisler’s photos always capture the essence of that person, and his approach makes his BTS videos particularly educational and interesting to share.

In this Master Series behind the scenes, we watch as Heisler explains his setup for Time Magazine’s 2005 “Persons of the Year” cover featuring Bill Gates, Bono and Melinda Gates.

The focus of the issue was philanthropy (hence the subjects), and even though Heisler usually gets free rein on cover shoots, Design Director Arthur Hochstein wanted him to put something heroic together. Here’s what Heisler came up with: The first problem he had to overcome given his set up was how to keep all three of them in focus while keeping their heads the same size. His idea was to try a 90mm lens with a 2x teleconverter, and after testing it out at home with his daughter and studio manager standing in, he was pleasantly surprised to find that it worked. First problem solved.

The second problem came when the two Gates and Bono showed up to the shoot and Heisler discovered that Bono was a short guy with a large head. The initial idea was to put Bono in the front, as the “emotional center” of the image, but this wouldn’t work.

After trying it the planned way several times, the decision was made to change up the order and put him in the center. As it turns out it worked out better that way, because putting Bono in the center of the image wound up achieving Heisler’s goal even better. He’s not only the emotional center, but the literal center. 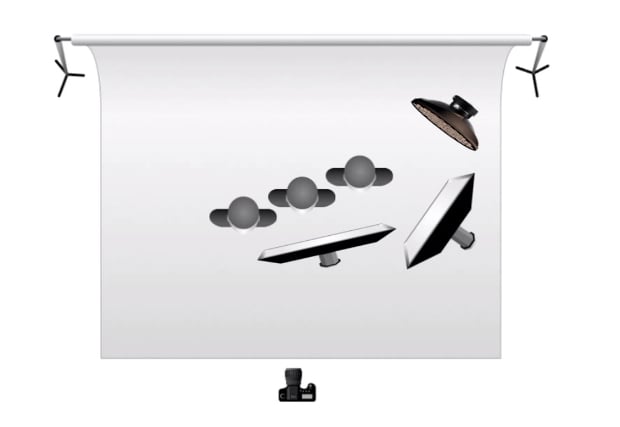 The final piece of the puzzle was, of course, lighting. As you can see from the diagram above, in order to achieve the “heroic” effect he was asked for, he used two lights and a reflector. Behind them and to the right he placed a narrow beam reflector with a grid and a CTO on it, in front and to the right was a soft box, and underneath the three philanthropists was a strip softbox that provided an under-lit fill to give all three a more regal stature.

You can hear the entire story from the man himself by checking out the video at the top, but the lessons are the same as usual with a Heisler shoot. Plan, plan, plan some more, and then be ready to alter the plan at a moment’s notice — or in this case, when you realize your celebrity is only 5’9″ and has a big noggin.