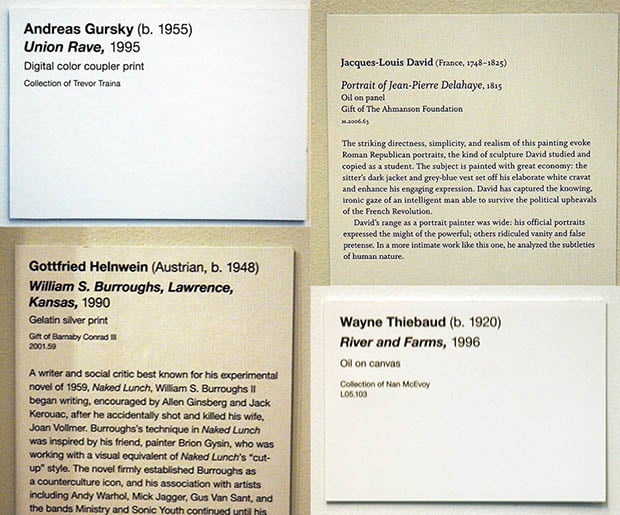 Put your name and date on everything. That’s the first lesson every kindergartener learns in school. Drawings, writing, scratch marks, pinecone Santas, they all get labeled. Kids are taught to do this because name and date are essential in understanding any piece of content. And hopefully it’s a habit that remains with them for life. If that pinecone Santa ever makes it into a retrospective, viewers are going to want to know who made it. And more importantly, when.

This will come as no surprise to those in the art world. Generally when you see something on display in a gallery or museum, a label identifies the creator and date. Sometimes it contains other info too, but it will almost always include at least that much.

It’s the same with books. Page one lists the author’s name and date of publication. And with albums, and statues in the park, and Guinness world records, and anything worth reading online, and so on. And photography is no exception.

I think there’s a general sense that the artist’s name is the most critical piece of information in assessing a photo. If you’re buying photography as an investment it probably is. It’s not necessarily about what’s in the frame. If it was made by X or Y artist it’s worth something. And that mentality carries through most of photographic history. When history books are written, they’re usually organized by specific photographers. So-and-So did X, then another person did Y, etc.

But for me, date is even more important than name. With all art this is true, but especially with photography. Because time is integral to the form. Every photo is locked into a specific moment. If I show you a photo and tell you it was made last year you will understand it in a certain way. If I then say that it was actually made 50 years ago, your interpretation may change radically.

Often a photograph’s appearance dates itself. Looking through Keizo Kitajima’s USSR 1991, for example, the title is a bit superfluous. The images feel like 1991. The way the people dress and look, and the buildings, and the style and tonal quality of the photography has an early 90s feel. You can see how relabeling these photos 1965 or 2011 might skew how they are viewed. I think today’s Instagram photos have some of that same quality. When we look them in 40 years or so they will scream 2013 in ways we can’t even notice now.

Sometimes works come along that seem confusing. Picasso painted Les Demoiselles d’Avignon too early. The world wasn’t ready for it in 1907. Looking back, it’s pretty clear that the painting was ahead of its time. It probably belonged in 1920 or later. Oh well. Leave it to an artist to f**k with history. I think Ed Ruscha’s early books have some of that same quality. They look like books that could’ve been published last year.

You can see how date might be more important than name. To say something is “ahead of its time” is considered a complement. To say it “looks like so-and-so’s work” is not.

Sometimes the evil powers that be try to thwart this logic. It’s common in the music industry to see albums rereleased under a recent date, with little or no mention of the original recording date. According to my iTunes library Tyrannaosaurus Rex’s Unicorn came out in 2012, not 1969. Tragic Songs of Life by the Louvin Brothers? 2011, not 1956. Of course one can find the original release dates with just a little research. But in today’s online world I suspect that doesn’t always happen. The new date is swept up into the rest of the production info and becomes part of the work.

When I mix songs for my radio show I usually aim to have no obvious connection between any two consecutive songs. I want the show to be the antithesis of despicable Pandora. And the easiest way to do that? Mix up the dates. If there’s a 20 year gap between songs I can generally count on them sounding different. Of course other things go into it too — any song by Beefheart or from 1973 will usually sequence well in any context — but that’s the starting point. So when record producers erase history my task is harder.

Can you imagine if the same thing happened in photography? What if someone took a Dorothea Lange photo, printed a nice new inkjet, and slapped a 2013 label on it? I suppose Sherry Levine tried something similar with Walker Evans, but that was more reappropriation than redating. In fact sometimes a rerelease will be a radically new interpretation. If it’s a music album it might include outtakes or remixes. In the photo world, photobook reprints often include a new essay or new edit of the work. In these cases by all means, supplement the old with with a new one. But don’t replace it!

The trend I see more and more is backdating. Instead of being labeled with a simple year or month, content is often described by how old it is. 2h or 6d, or 3 months. This is the method of Facebook, Twitter, Feedly and much of Tumblr.

I suppose I can’t complain too much, since at least this offers some time-based context. But the mentality behind it seems to arise from the same lazy muck of record producers and teen solipsists, and maybe Ram Dass. The only thing that matters is here and now, and screw any historical understanding. The unwritten corollary is that as things age they become less important. In the Twitterverse anything older than 3h is considered irrelevant.

I’ve been through my hippie stage. I can Be Here Now when it’s required. But that doesn’t mean tossing out the lessons of Kindergarten. Date is key.

About the author: Blake Andrews is a photographer based in Eugene, Oregon who runs the photography blog B. This article originally appeared here.

Vine is Exploding, and People Are Starting to Take It Very, Very Seriously