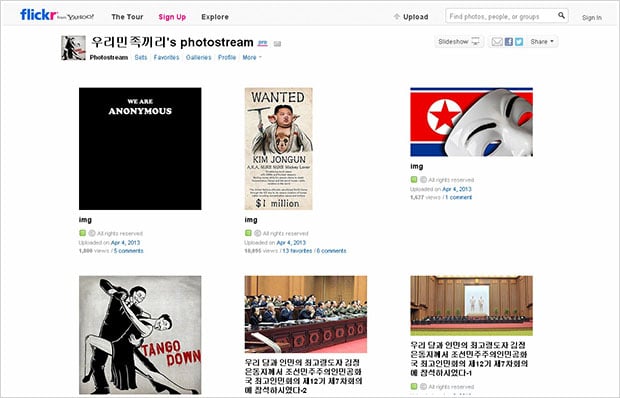 Did you know North Korea had an official Flickr page? The country’s account on the popular photo sharing service made headlines today after it was hacked and defaced by Anonymous.


North Korea has been saber rattling over the past few days, and the hacktivist group Anonymous decided to respond by launching a widespread hacking effort against Uriminzokkiri, the state-run central news agency of North Korea.

The Flickr account, once found at flickr.com/uriminzokkiri, was used to distribute news photographs and propaganda around the web and around the World. After breaking into it, Anonymous uploaded a number of images poking fun at North Korean leader Kim Jong-Un.

The photo was viewed over ten thousand times as word of the hack spread, but before long the entire Flickr account was nuked. It can no longer be accessed, and a message stating “This member is no longer active on Flickr” greets you when you try to visit the page.

Aside from this successful strike, North Korea’s social media presences on Facebook and YouTube are alive and well, and the fact that major news agencies are happy to distribute official government photographs means we probably won’t be seeing any shortage of propaganda photos anytime soon.