Faced with another birthday party at Chuck E Cheese, a place my daughter loves but low ISOs do not, I decided to get creative. I shot a collection of photos with a set of three Yongnuo YN-560 and YN-560 II flashes with a diffuser cap/”omni bounce” inside of small lampshades placed along the table.

I wanted to go for a look like dinner around a table with candles/lamps sort of low key, pleasant ambiance kind of thing. I also wanted to shoot at lower ISOs to get some real nice images of my kid as keepsakes. I don’t know if something like this would be viable/useful outside of a family event where I don’t care that I can see the bottoms of the lamps are actually flash bodies, but, I had thought that perhaps I could push the idea further in the future and hide the flashes in something that actually looks like a lamp. This was a prototype test run where at least I cared to get some decent shots. Anyway, the flashes were all set at 1/64th power, zoomed out to 24mm, diffuser down, gelled 1/4 CTO, with Meike omnibounce-alike cap inside simple small white lampshades that I bought at Wal-mart for $3.50 each. The bounce caps (for bare-bulb-like effect) cost $5 each so the modifier cost was very low per flash. 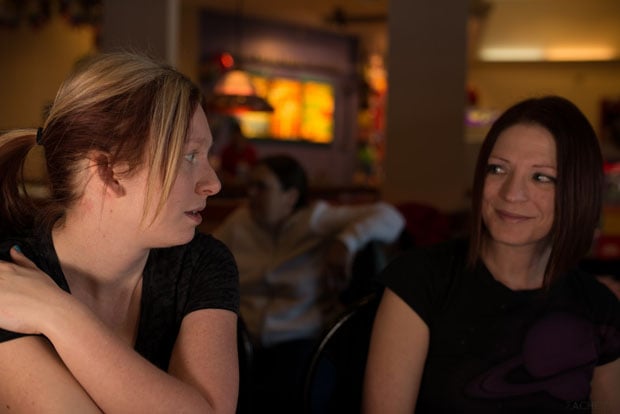 Keep in mind that this was merely my own kid’s birthday party and not some event I shot for pay. I figured it might be interesting to the strobists anyway due to the unusual approach I took to dealing with a low/mixed light setting where the ceilings were too high and unpredictably colored to bounce (and I don’t really like the eye-shadow effect of bounced flash anyway.)

About the author: Zachery Jensen is a photography enthusiast and software engineer based in Salt Lake City, Utah. Visit his website here, his Facebook page here, and his Flickr here. This article originally appeared here.

GPP2013 Shoot-Out: Taking a Portrait of One of the World’s Greatest Portraitists

The Pale Blue Dot: A Portrait of Earth Shot From 3.7 Billion Miles Away