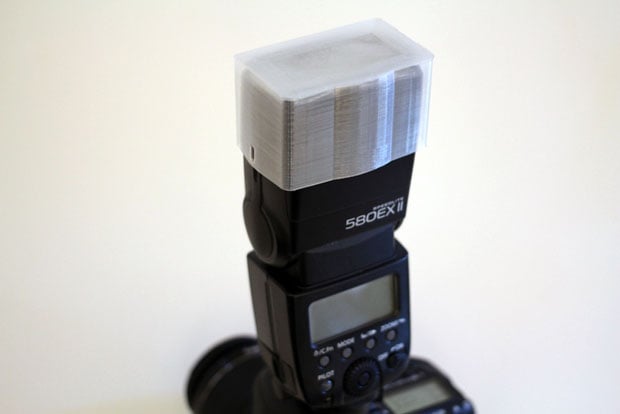 3D printing is becoming cheaper and more accessible, so photographers no longer need to rely on camera gear manufacturers for simple plastic gear items such diffusers and other light modifiers. Eric Chu over at MAKE recently noticed a photo intern using a piece of paper as a cheap flash bounce. Seeing that the makeshift bounce didn’t ever last more than a few days, Chu wanted to offer a better solution… so he decided to produce one himself.

After doing some research into good shapes for flash diffusers, he turned to Autodesk Inventer and had two designs printed out in 3D out of a corn-based plastic.

The first version, seen above, was a standard rectangular version that companies like Stofen sell for about $10-15. He followed that one up with a triangular model that “maximizes surface area for greater light diffusion: 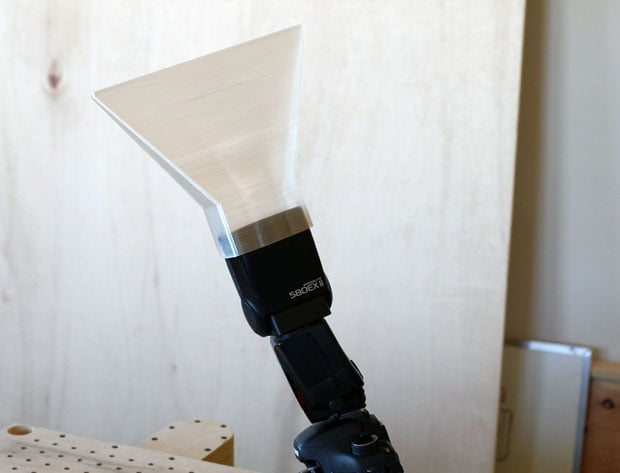 Here’s a design warning Chu has for those who’d like to try the same thing:

A challenge I ran into while modeling the diffuser was that the body of the flash was not just a simple rectangle (it actually consists of a lot of curves), so I couldn’t easily or accurately measure the dimensions of it. This meant that I couldn’t make the diffuser that would perfectly contour around it. Instead, I settled on measuring the max width, length, height, a small curve on the front, and the two grooves on the sides of the flash, to allow the diffuser to slide up or down.

Chu says that the DIY 3D-printed diffusers have held up in daily use for over a month now, and work well for photos that end up being published in Make.

He has made his designs freely available for download over at Thingiverse. They’re designed for the Canon Speedlight 580EX II, but if you’re experienced with modeling programs you should be able to modify them for other flash units as well.