Last year, New York-based guerrilla historian, urban explorer and photographer Steve Duncan gave an 18-minute talk (seen in the video above) to the audience at TEDxPhoenixville. Duncan spoke on his motivations for going deep into the underground infrastructure in major cities around the world, peeling back layers of a city to see and document things that are hidden to people above ground.

As an urban historian & photographer, I try to peel back the layers of a city to see what’s underneath. From the tops of bridges to the depths of sewer tunnels, these explorations of the urban environment help me puzzle together the interconnected, multi-dimensional history and complexity of the great metropolises of the world.

Duncan first moved to New York at the age of 18. After falling in love with the city, he decided that he wanted to see all of it. Not just “all” as in every street and corner found on a map of NYC, but “all” as in the layers above and below the city as well. 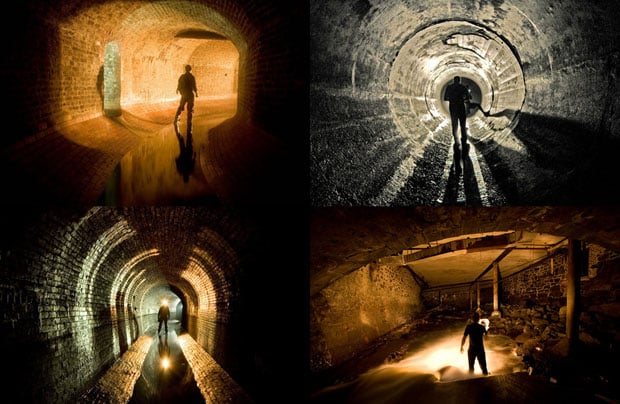 He began venturing into areas of the city that were off limits to the general public, simply because they were off limits. Duncan was drawn to the fact that he was gazing upon places that most New Yorkers will never get to see in their lifetimes.

Later on, Duncan began to explore and photograph sewer networks all around the world, in cities such as New York, Paris, London, Rome, Naples, Stockholm, Berlin, Moscow, Montreal, Toronto, Chicago, Los Angeles, and Calcutta. As his work began to receive attention, he began appearing on TV and publications around the world.

You can find (and purchase) a selection of his underground photographers over on Imagekind.