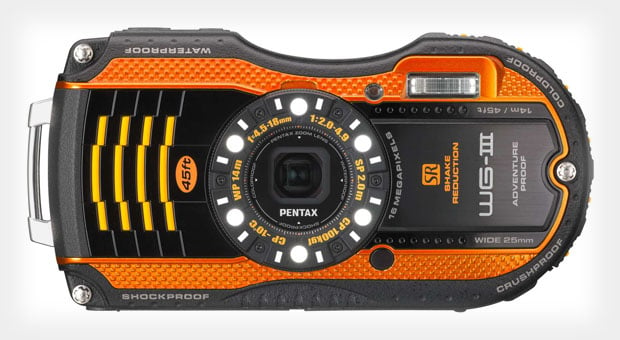 Pentax has announced its latest line of uber-durable “adventureproof” compact cameras. There are three distinct cameras in the lineup: the WG-3, the WG-3 GPS, and the WG-10. All three are designed to take a beating and survive in locations that would be hazardous to other cameras’ health.

It’s waterproof down to 45 feet, shockproof from drops up to 6.6 feet, coldproof down to 14-degrees Fahrenheit, and crushproof up to 220-foot-pounds of force.

The cameras feature a nifty Digital Microscope mode that uses 6 LED lights arranged around the lens on the front of the camera as illumination for macro photographs. In this mode, the camera can focus as close as 1cm (~0.39in) from the subject. The GPS version of the WG-3 includes a GPS unit that can geotag your photographs in order to document where your journeys take you. This version has a second LCD display on the front of the camera that displays compass, elevation, and depth information.

Like many everything-proof cameras these days, the WG-3 features a rubbery grip and rugged design. Pentax is also releasing a third adventure-proof camera, the WG-10. It’s actually a rebranded version of the Pentax WG-1 that will be sold exclusively through Target starting in mid-April 2013 for the price of $180.