Czech Republic-based photographer Katka Pruskova recently completed her first time-lapse project, and it’s quite an impressive effort. Pruskova photographed flowers in front of a black backdrop, using the magic of time-lapse photography to capture them blooming. She shot more than 7100 still photographs using her Canon 5D Mark II over the couse of more than 730 hours. 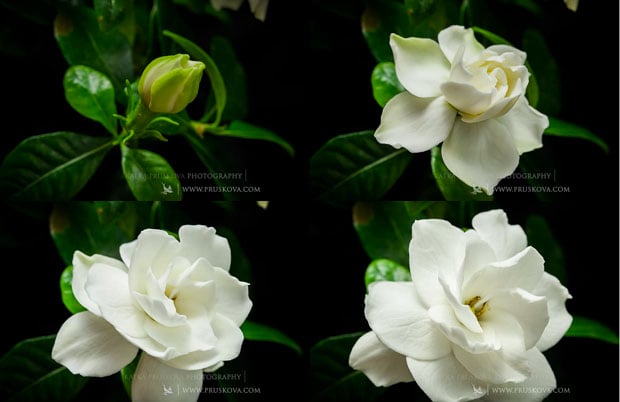 Here’s what Pruskova has to say about the technical details of how the time-lapse was created:

It was shot in a homemade “studio” that I made in a cabinet. I covered the back of the cabinet with black cloth, the flower was placed in the middle, and the whole cabinet was then covered with another cloth to insulate from the daylight (to keep the light constant, which is the most important). Two led lamps were used to illuminate the flowers.

Some flowers bloomed in hours, some in few days. Therefore the interval between photos varies from few seconds to several minutes depending on the type of flower. After several missed tries you’ll learn. In order to keep ISO as low as possible (couldn’t go lower than 640 because of low light), the shutter speed was usually 1/5 s at f/16. All flowers are mine or from my mother’s garden.

Hands-On With the Portable and Flexible Canon PowerShot N