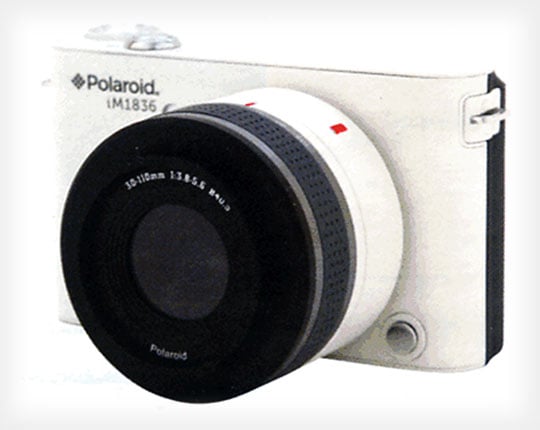 Here’s a strange leak that has people scratching their heads: photos and specs have emerged that show a soon-to-be-announced interchangeable-lens mirrorless camera by Polaroid. Called the IM1836, the camera will be a Polaroid-branded camera manufactured by Sakar International and will be powered by Android OS.


PhotoRumors first spotted the leaked files published over on a Russian social network. A press release was also found on Dealerscope magazine.

It revealed that the upcoming camera will be powered by Android 4.0 and will feature a 3.5-inch touchscreen, an 18.1 megapixel sensor, a panorama mode, a pop-up flash, blink detection, built-in Wi-Fi, a microSD card slot, headphone and HDMI outputs, and HD video recording.

What’s strange is how much the camera looks like an existing camera on the market: the Nikon 1 J2 mirrorless camera. Even the 30-110mm lens is one that’s offered in the 1 Series lineup.

It looks like Polaroid and Sakar were somehow able to partner with Nikon and repackage a J2 with Polaroid branding on the outside (and minor cosmetic changes) and Android OS on the inside.

Here are the two cameras side-by-side, just to give you an idea of how similar they look:

On the other hand, the back sides are quite different:

That’s all that’s known about the camera at the moment. Given how fleshed out these leaks were, it seems like the camera is on the very near horizon. Unless it’s announced in the next couple of weeks, CES 2013 might be when we’ll see this thing officially unveiled.

Update: The Imaging Resource has confirmed with Polaroid’s CEO that this camera is indeed on the way.