After a substantial leak in mid-December, we expected that Polaroid would unveil its android-powered J2 (or is it J3 now?) look-alike at CES. And here it is, officially announced in all its pre-production glory alongside a few other, less-impressive products.

As the leak suggested, the camera will come equipped with an 18.1MP sensor, 3.5-inch touchscreen display, WiFi and Bluetooth compatibility, 1080p video capability, 10-30mm kit lens, a pop-up flash, and Android 4.1 Jelly Bean built in. All of this will be available sometime this quarter for the shockingly low price of $400.

What we didn’t initially know is that the sensor — a 1″ sensor ala its Nikon twin — will be housed inside the lens module. Polaroid isn’t the first to do this, the Richo GXR does as well, but it’s definitely not the norm. According to Polaroid, adapter modules that can take Nikon F, Pentax K and Micro Four Thirds lenses are all in the works — all of which will also use a 1″ (2.7 crop factor) sensor. Also releasing at the same time are two other cameras: the 1836’s non-android-based mirrorless sibling, the iM1232W (above), and the 24x superzoom iS2433. 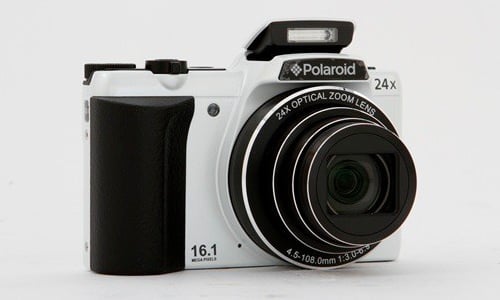 Photos of Beams of Sunlight Bouncing Around a Room