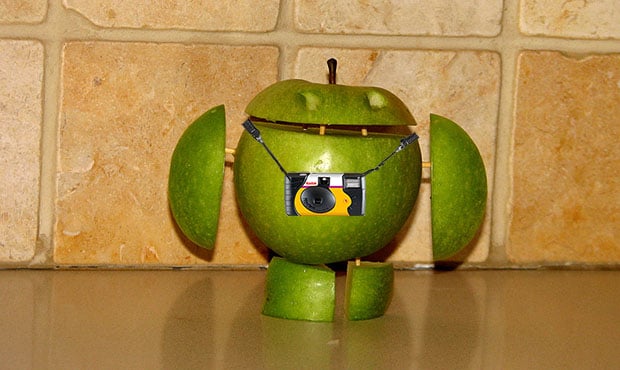 Yesterday we shared some news courtesy of the Wall Street Journal that Kodak had received a generous bid for its patent patent portfolio of over $500M. This was good news for Kodak, seeing as $500M was the mark the company had to hit in order to receive $830M in exit financing that would play a crucial role in helping Kodak dig its way out of bankruptcy.

However, all we knew at the time was that the bid was being put forth by a “consortium of bidders” out of Silicon Valley. Well, as it turns out, that consortium is being led by none other than the unlikely team of Apple and Google.

According to Bloomberg‘s own mysterious “people with knowledge of the situation,” the two companies have set aside their differences in an attempt to make the sale go as smoothly as possible and avoid future patent litigation.

The news is surprising, given reports earlier this year that each of the two tech giants were leading their own individual groups in an effort to keep the 1,000 plus patents away from their rivals.

At the time, Apple had partnered with Microsoft — another unlikely alliance — while Google had teamed up with Samsung, LG, and HTC.

As with the news yesterday, nothing has yet become official, with each of the three parties involved declining to comment for one reason or another. But if these two behemoths have indeed joined forces, then it seems that even hell and high water would have a hard time standing between them and a successful purchase.

Image credit: Photo illustration based on Android made out of an Apple by Tsahi Levent-Levi