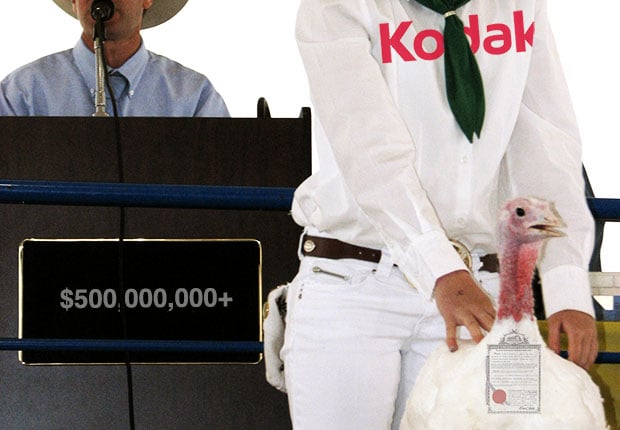 Over the last year, no news has been good news for Eastman Kodak. The company’s slow and painful climb out of bankruptcy has involved everything from corporate greed to lost patent wars and sub-par auction outcomes. But just a few weeks ago a flickering light emerged at the end of the tunnel for Kodak in the form of $793M in conditional financing.

In fact, since we last reported on the story, the loan amount has gotten even bigger. That sizable $793M has been upped to $830M, every dime of which Kodak desperately needs to get its hands on if it ever intends to escape bankruptcy. But as the saying goes: there’s no such thing as a free lunch — and definitely not one worth $830M. The banks that have agreed to help Kodak out made the financing conditional: Kodak doesn’t get the money unless the company’s long-awaited patent sale exceeds $500M.

Well, according to the Wall Street Journal and their omniscient “people familiar with the matter,” Kodak is about to exceed that goal thanks to a “consortium of bidders” out of Silicon Valley. The deal hasn’t officially closed, so Kodak execs won’t be breaking out the cake just yet; but it looks like Kodak’s dreams of growing-up to be a commercial printing company will be getting at least a few significant steps closer to reality in the next few days.

(via WSJ via AllThingsD)

Image credit: Photo illustration based on Auction day at the Fair 2010 by Bob n Renee