Programmer and photography enthusiast Roderick Lee Mann snagged quite the time-lapse video earlier this week. He had originally set up his camera to snap photos of a beautiful Hawaiian sunset, but afterward he discovered that he had captured something that you can’t really plan for: the perfectly-framed formation of an end-to-end rainbow.


We asked him about the story behind the video, and here’s what he told us:

I’m on vacation on Kaua‘i. We had gone to Barking Sands beach earlier that day, and on our way back to the rental house we decided to make a detour to the top of Waimea Canyon. We were racing the sunset to get there, but managed to arrive before the entire canyon was in shadow.

I bought a GoPro Hero 3 Black Edition the week before the trip (barely; they were very hard to find). I had it set up on a makeshift stand, put it into 1 second-per-frame time lapse mode, 12 MP images, placed it outside the safety fence at the lookout point (a chilly 3400′ above sea level), and pointed it at the canyon. I wanted to capture the last bit of sunlight rising up off the top of the far canyon wall.

I wandered down around the lookout with my iPhone 5, taking photos and panoramas, and generally freezing because I was still in my damp bathing suit from the beach visit earlier. Everyone had their fill of the canyon, I grabbed the GoPro, and headed back to the car to wait for the stragglers in our group. It wasn’t until I got back to the house that I realized what I had captured. I wish I had let the camera run longer. 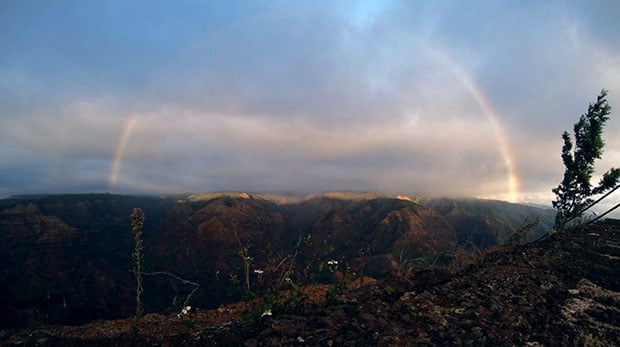