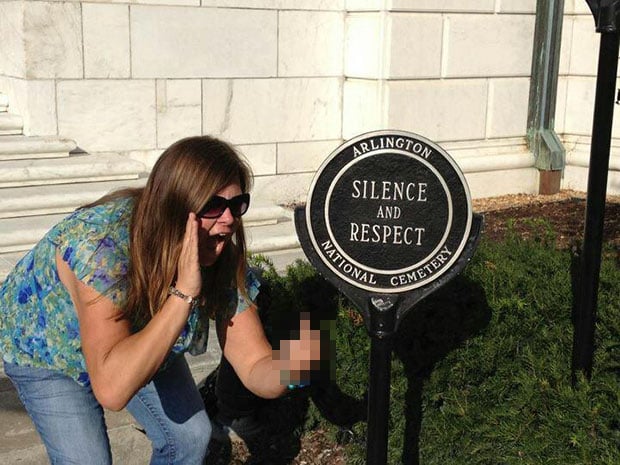 It’s a story that’s becoming more and more common: someone uploads tactless photos to the Internet, the Internet disapproves and collectively pounces on the person. It happened after Hurricane Sandy when a Brazilian model decided to do a photo shoot amidst the devastation, and it has happened again. The target of the Internet’s fury this time is a woman named Lindsey Stone, who posted the above photograph to her Facebook page.

Stone shot the photo with her friend Jamie Schuh while visiting Arlington National Cemetery last month. The image was meant to be rebellious, with Stone doing exactly what the sign said not to do (shouting and disrespect versus silence and respect). Then she made the mistake of uploading the image to her personal Facebook page.

After the photo received a number of negative comments, Stone explained her actions with the following comment, saying that she was just being the douchebag that she is, that the photo represented “challenging authority in general,” and that she didn’t intend any disrespect of the military:

The apology was too late, and the cat was already out of the bag.

From that point, a new Facebook page popped up calling for Stone to be fired from her job at a learning disability non-profit named LIFE — a page that has since attracted over 16,000 Likes. 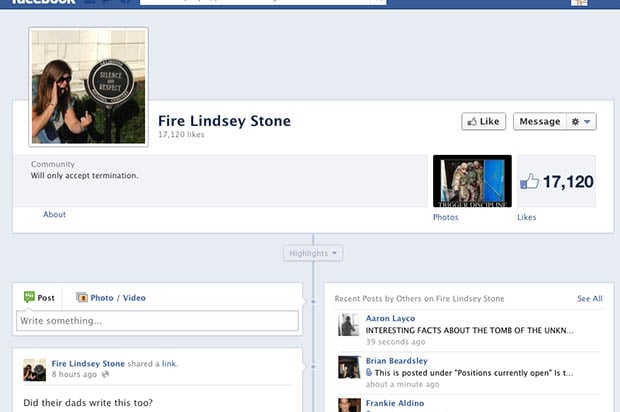 The story went viral across major websites as well, with Wizbang, Fark, and Gizmodo reporting on the story before it spread to national media.

LIFE quickly released a statement apologizing for Stone’s actions and saying that she has been placed on unpaid leave:

On Nov. 19 at approximately 6 p.m., we became aware that one of our employees had posted an offensive, inappropriate photograph on her personal Facebook page. The photo was taken at a national historic site in October by a fellow employee during a trip to Washington, D.C. attended by 40 residents and eight staff. The photo has since been removed from Facebook, and both employees have been placed on unpaid leave pending the results of an internal investigation.

This photograph in no way reflects the opinions or values of the LIFE organization, which holds our nation’s veterans in the highest regard. We are proud to have veterans serving on our staff and board of trustees, and we value their service. The men and women who have selflessly fought and sacrificed their lives to protect the rights and lives of Americans deserve our utmost respect and gratitude. We are acutely aware that this photo has done a disservice to veterans and we are deeply saddened that it was taken and shared in a public medium.

Stone herself wrote an apology that was published today by the Boston Herald:

We sincerely apologize for all the pain we have caused by posting the picture we took in Washington DC on Facebook. While posted on a public forum, the picture was intended only for our own amusement. We never meant any disrespect to any of the people nationwide who have served this country and defended our freedom so valiantly. It was meant merely as a visual pun, intending to depict the exact opposite of what the sign said, and had absolutely nothing to do with the location it was taken or the people represented there. We never meant to cause any harm or disrespect to anyone, particularly our men and women in uniform. We realize it was in incredibly poor taste, and are deeply sorry for the offense we have caused.

We also sincerely apologize to LIFE, Inc. It is an amazing organization that provides invaluable services to adults with learning and developmental disabilities. We are beyond remorseful that our actions have caused them such undue public scrutiny. The disrespect implied by our picture has nothing at all to do with LIFE’s mission statement or values. We regret having caused any suffering to the staff members, residents, families and friends.

Again, we very sincerely apologize to everyone who took offense to the photo. We realize that it was an ignorant and distateful thing for us to do, but we truly meant no harm. We are deeply sorry.

Stone has since nuked her Facebook page. Her father is also speaking out on national media:

The story is yet another stark reminder that personal Facebook pages can be a lot less private than you’d like, and that a single photographic misstep on the Internet has the potential to turn your life upside-down.