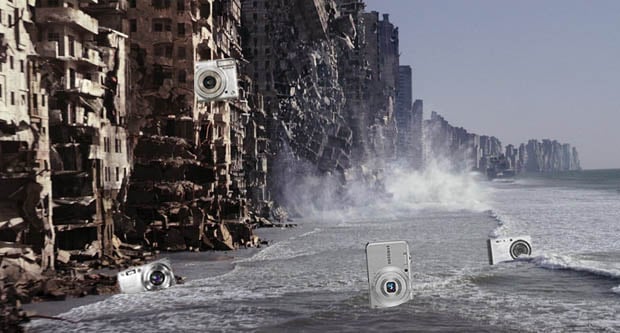 Hiroshi Hiyama over at Phys.Org reports that smartphones are crushing the point-and-shoot industry, putting compact cameras in the same group as video game consoles and portable music players — devices that are having a hard time competing against all-in-one phones. The numbers are crazy:

Just as digital cameras all but destroyed the market for photographic film, the rapid shift to picture-taking smartphones has torn into a camera sector dominated by Japanese firms including Canon, Olympus, Sony and Nikon. “We may be seeing the beginning of the collapse of the compact camera market,” said [analyst] Nobuo Kurahashi. Figures from Japan’s Camera and Imaging Products Association echo the analyst’s grim prediction. Global shipments of digital cameras among Japanese firms tumbled about 42 percent in September from a year ago to 7.58 million units, with compact offerings falling 48 percent, according to the Association. Higher-end cameras with detachable lenses fell a more modest 7.4 percent in that time, it said.

As the compact camera market shrinks, the war over mirrorless camera dominance is growing. All the major camera makers now have a horse in that race, which will only be heating up as consumers discover that they no longer have a need for small-sensor cameras.

Image credit: Photo illustration based on still from Inception by Warner Bros. Pictures