Wedding photographers are supposed to stealthily document unique moments, not become part of them. Unfortunately, the latter is what photographer Jacki Bruniquel did last month while photographing a wedding in South Africa. As the bride walked down the aisle with her father, a wedding photographer’s worst nightmare unfolded for Bruniquel: her head got too close to a burning candle, kindling a small blaze in her hair. In a few short seconds, the entire room was staring and gasping at Bruniquel rather than the bride. 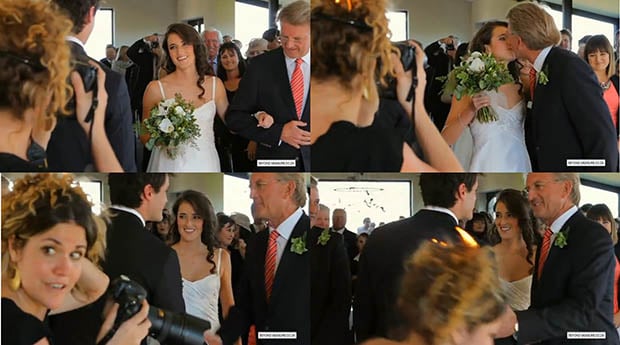 Videographer Mark Thompson captured the clip above, and writes,

While photographing Murray and Emma’s wedding Ceremony at Netherwood Estate, Jacki Bruniquel’s hair caught alight after getting too close to a candle. One of Murray’s groomsmen attempted to help Jacki put the flames out. The moment when the groom meets his bride at the alter had some added entertainment.

Fortunately for Bruniquel, the bride and groom were both easygoing people, and everyone in the room had a good laugh.

The photographer writes on her blog:

In that situation the only thing you can do once the flames have been patted out is to once again… laugh and keep on shooting. It was funny. It was certainly a wedding I will never forget that is for sure and my hair did actually need a trim! (although I have to say that it hasn’t been quite the same since then!)

This is actually not the first wedding horror story Bruniquel has experienced during her career. She had a smellier one during a different wedding a while back:

[…] I sat in horse poo whilst doing a few groom portraits right before the speeches were about to start. I was sitting in the grass shooting away and when I stood up my assistant gave me a look that indicated that something was very very wrong. She had a reason for the horrified expression – My butt was covered in brown manure! Not cool. What was even more uncool was the fact that I didn’t have another pair of pants to change into and it looked as if I had had an accident in my trousers. There was nothing I could do. I just had to laugh and keep on shooting!

So if you ever find yourself in a situation has suddenly gone very wrong, just do what Bruniquel has learned to through her singular experiences: laugh and keep on shooting.

(via Jacki Bruniquel via HuffPo)

Image credits: Video and stills by Mark Thompson of Beyond Measure Productions