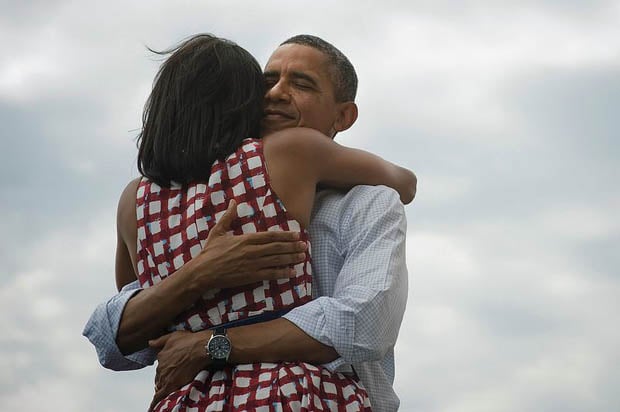 Barack Obama broke online photo-sharing records this week after winning Tuesday’s presidential election. When his victory became evident, Obama shared the above photograph on his Facebook timeline with the simple caption, “Four more years.” That photograph quickly attracted “likes” faster than any other image shared through the social networking service. When it hit more than 2.1 million likes shortly after midnight Wednesday morning, Facebook announced that it had become the most-liked Facebook photo of all time.

The furious “liking” is still ongoing, pushing the bar even higher for any photo that wants to break the record. As of this post, the photo stands at over 4.1 million likes: 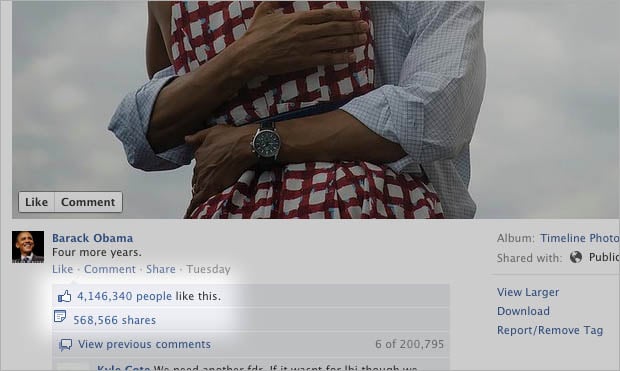 The same photo and message made a huge splash on Twitter as well, garnering hundreds of thousands of retweets — the most his account has ever seen, and very likely the most ever on Twitter for any tweet.

It’s not the first time during Obama’s presidency that he has broken a photo-sharing record: in May of last year, a photo of him in the Situation Room during the bin Laden raid became the fastest viewed photo ever on Flickr.

Gizmodo has published an interview with the photographer behind the image, a woman named Scout Tufankjian. She reveals that the photo was captured at a campaign event in Iowa back on August 15th using a Nikon D3 and 85mm f/1.4 prime.

This was the first event the First Lady had been at and they hadn’t seen each other for a few days. Because I’m a total sap and am also relatively recently married, I find their relationship to be totally inspirational in terms of the respect they have for each other, so I always try to focus on them as a couple, rather than as public figures.