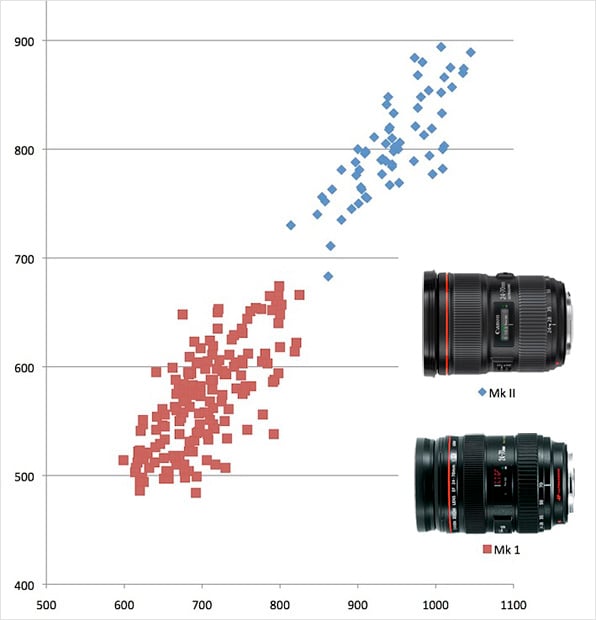 Despite its girth, weight, and price, Canon’s original 24-70mm f/2.8L is a highly-regarded general-purposes lens. When the followup Mark II version was announced back in February, the higher-price tag, similar specs, and lack of IS had many photographers scratching their heads. Then the reviews started coming out.

Reviews had glowing things to say about the Mark II, calling it “the best performing Canon full-frame-compatible general purpose zoom lens available” and saying that it’s “way better than the lens it replaces.”

A look at the graph shows a couple of things. Overall, the range of variation of the Mk II lens is about the same as the Mk I version […] You can also see that three of the tested Mk II lenses seem to be out-of-sorts. The bottom line is that 3 lenses out of the 70 copies were not up to expectations. That is a bit higher than the 2% unacceptable rate we usually see ‘out of the box’.

One other thing demonstrates the difficulty we have with one of the less-than-expected copies; they’re still better than the best of the 24-70 Mk I versions. They just aren’t as much better as they should be.

So basically, the Mark II lenses with the worst sharpness were still sharper than the sharpest Mark I lenses. That’s crazy.

P.S. These tests also show a tricky thing about lens reviews: the fact that copy-to-copy variation can lead to different reviewers concluding different things about the image quality of lenses. It’d be nice if every reviewer had 70 of the same lens on hand to test, but sadly camera companies don’t send out review units by the truckload.