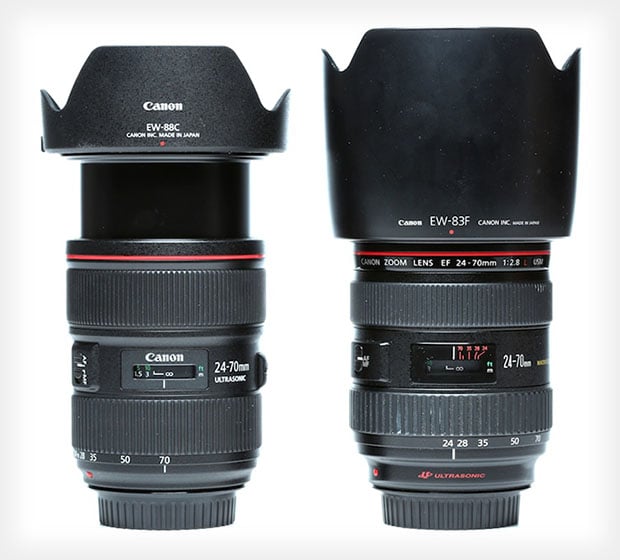 After being announced back in 2002 as a replacement to the 28-70mm, Canon’s 24-70mm f/2.8 (above right) quickly became an extremely popular and highly regarded lens due to its friendly all-around focal range and sharpness. When the Mark II version was unveiled back in February to succeed “The Brick”, as the Mark I version is called, photographers grumbled at its hefty $2,300 price tag, the fact that it uses an 82mm filter instead of 77mm, and the lack of Image Stabilization. Roger Cicala over at LensRentals tested out the new lens, and has extremely positive things to say about it:

This is short, sweet, and simple. The resolution absolutely, positively kicks butt and takes names. It is way better than the lens it replaces. It’s better at 70mm than the best Canon zoom I know of, the 70-200 f/2.8 IS II. It’s even better at 24mm than the sharpest 24mm prime we have, the Canon 24 TS-E. In the center, in the corners, it doesn’t care. We only had 5 copies to test, but they were all very similar with little copy-to-copy variation.

Resolution is not everything, of course. But it’s certainly an important thing. Unless the real lens reviewers find some dramatic problems with this lens, I’d have to lean towards worth-the-money on this one. I can’t believe I’m saying that a $2,300 standard zoom is worth the money. But then again, I can’t believe I’m seeing a zoom lens out resolve a $2,000 world-class prime, either.

iPhone 5 Camera Stays at 8MP and f/2.4, but Gets a Little Leaner