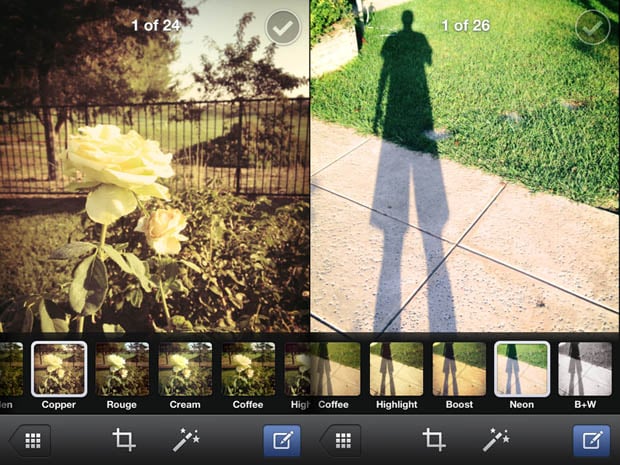 To access the filters, simply select a photo in your collection and tap the magic wand icon at the bottom. This brings up 14 different filters: Contrast, Cool, Light, Emerald, Bright, Golden, Copper, Rouge, Cream, Coffee, Highlight, Boost, Neon, and B+W.

These filters first made their appearance back in May when Facebook launched its dedicated camera app called Facebook Camera. However, that app has a much smaller user base than the main Facebook app (~3000 customers ratings on iOS at the moment, compared to ~2 million for the primary app), so integrating its special features into the primary app will help push the filters into the mainstream.

The new version 5.1 update also brings Facebook Camera’s multi-photo uploading to the primary app, allowing you to share a batch of photographs at once.

With most of Facebook Camera’s distinctive features now baked into Facebook’s main app, we should see the camera app’s usage drop quite a bit. It’s main benefit now is that it lets you browse only photos and in a more streamlined way.

Even though it’ll be late to the party, Twitter does have one thing in its favor: instead of generic filters, it will reportedly offer filters that attempt to mimic specific films from the past (e.g. 1960s Kodachrome and 1890s sepia-toned film).