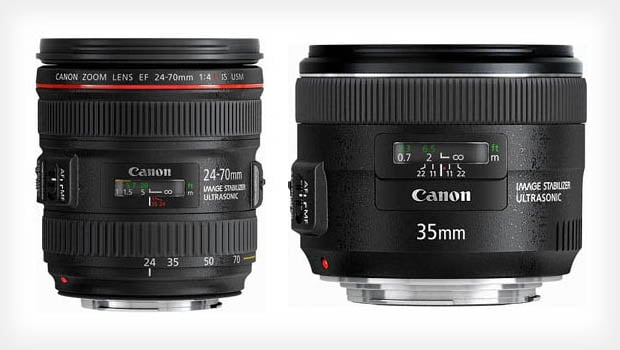 Canon’s two soon-to-be-announced lenses were leaked today by Japanese website Digicam info. The first one is, as suspected, the 24-70mm f/4 IS. The second one was more a surprise: it’s not a new 50mm, but a 35mm f/2 IS. Canon is continuing its new trend of building image stabilization into wider-angle lenses — a bit strange for still photographers, but great news for people who record video with their DSLRs.

Canon Rumors writes that this new lens will be included with the upcoming Canon 6D as the kit lens.

Both lenses are set to hit store shelves sometime next month, but the official announcement should be arriving very shortly (perhaps sometime this week). In Japan, the new 24-70mm and 35mm will reportedly cost ~$1,808 and ~$923, respectively. We’ll likely see them with smaller price tags in the US, but the lenses will most likely be pricier than what the rumors from this past weekend suggested.