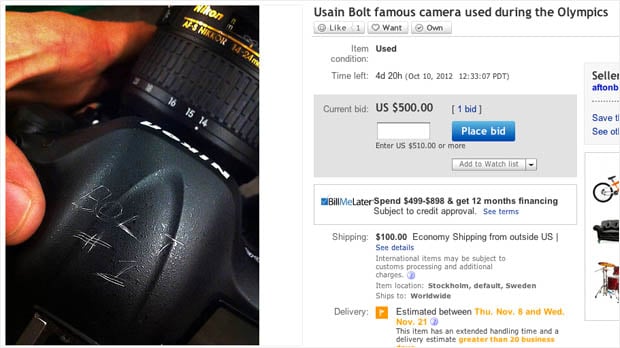 Well, that was abrupt. On Tuesday, we wrote that the Nikon D4 that Usain Bolt had famously used after winning an Olympic gold medal was up for auction on eBay, with the proceeds going toward educational and cancer research charities. After the story was reported worldwide, the high bid quickly rose until it hit $11,600 today. Then suddenly, it was gone.

This morning, with four days left to go, the auction page began returning a “not found” message. We asked Jimmy Wixtrom (the sports photographer behind the camera and the auction) about it, and were told that eBay nuked the auction for violated its charity auction policies.

Wixtrom has put up a new auction that’s compliant with eBay rules, but the damage has been done. All the links shared in old news articles are now dead, so this new auction likely won’t receive nearly as much attention as the old one. Bad news for the charities involved, but great news if you’d like to own a terrific and extremely collectible Nikon DSLR.

The Impossible Project VP Talks About Resurrecting the Polaroid Instamatic