Die-hard Dodgers fan Bobby Crosby is the only person to ever film himself catching a home run at a Major League Baseball game. That’s not all though: over the past few years, he has also filmed himself catching tens of home runs during the batting practice prior to games, holding his baseball glove in one hand and his camera in the other. The video above, which is currently going viral online, shows Crosby’s amazing first person view of all but a few of those catches.

In each of the clips, Crosby starts with a zoomed-in view of the batter at the plate. After the batter whacks the ball, he zooms all the way out as it approaches, and ends up capturing his catches in a wide-angle view as the the ball lands in his glove. 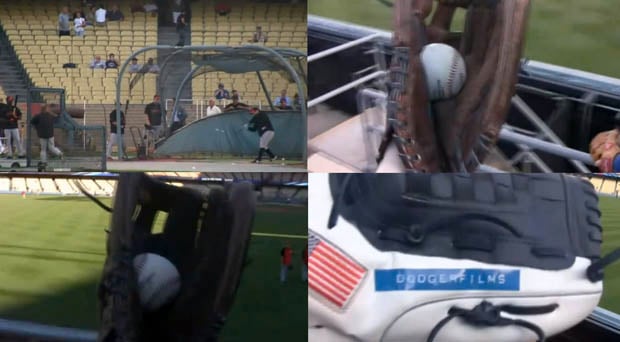 The fact that he has caught so many balls simultaneously in his glove and on camera is a combination of luck and preparation (that’s the same with all kinds of photography and videography, right?). He has season tickets for what he calls “the best seats in the stadium,” and attends about 75 home games every season.

He estimates that over his lifetime, he has caught over 1,000 baseballs during batting practice. On average, he catches one batting practice ball per game, and one in-game home run every 150 games.

Knowing where the batters will likely hit to and positioning himself in that area also contributes to his success.

When asked in an ESPN interview about how he manages to capture everything on camera as its happening, he replied,

It takes a lot of practice. You really have to focus on the ball. You can’t actually look through the camera, and you just have to have muscle memory making sure you’ve got your hand in the right place.

There’s a heartwarming aspect to the story as well: most of balls Crosby catches are given away to kids nearby.