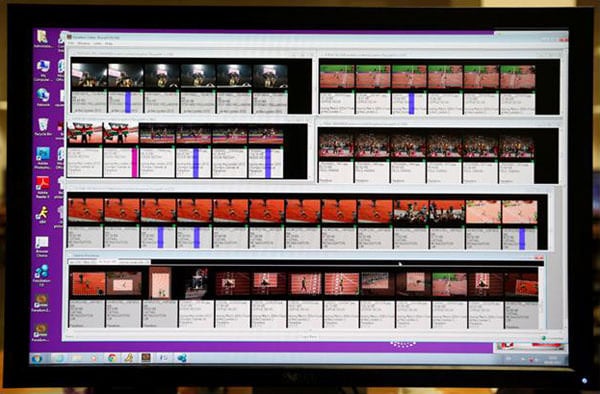 As we shared last week, being a sports photographer at the Olympics is a difficult task: battling a round-the-clock schedule and a sea of competing photographers, hauling around a boatload of gear from venue to venue is just the least of your concerns.

Shooters aren’t the only ones with a difficult job, though: photo editors have it just as bad. Reuters photo editor Russell Boyce has written up a fascinating article that offers a behind-the-scenes look into the responsibilities — and mindset — of a picture editor at the Games.

For the London 2012 Olympics, Reuters sent a total of 55 photographers, 17 picture editors, and 25 picture processors. Boyce was tasked with the responsibility of editing photos of gymnastics and athletics. He writes,

Imagine a 90-second gymnastic routine, followed by a perfect dismount, a roar of applause, tears of joy and a big smile and victorious wave to the crowd. Another gymnast slumps into their seat, more tears, this time of disappointment, realizing they have just lost a medal position. Such moments of raw feeling can unleash a torrent of hundreds of images. Which photographer could resist taking his or her finger off the shutter button during maybe four torrid minutes of emotional turmoil? I let you do the maths on the number of frames that are potentially transmitted. Even the best photographers who conscientiously edit their bad pictures, known as “chimping” in the trade as they huddle over the camera screen, can’t chimp when it’s all happening.

Within these hundreds of frames sits the key moment – which I must select, crop and send before our competitors find it in their file. If I fail in my task our competitor’s pictures will be published. If our photographer has a better frame in their raw file they will let me know in no uncertain terms later in the bar.

If you think you have it bad when it comes to editing photos after a shoot, consider this: it’s estimated that Reuters’ 17 editors looked over a staggering 1.5 million photographs during the course of the Olympics. That’s 88,235 photos per editor.

Over the course of the 17 days, each editor had to review an average of 5190 photographs per day and select the most publishable images — and all this with a massive deadline breathing down his or her neck.

We salute you, Mr. and Ms. photo editor!

Why You Should Always Rotate Original JPEG Photos Losslessly