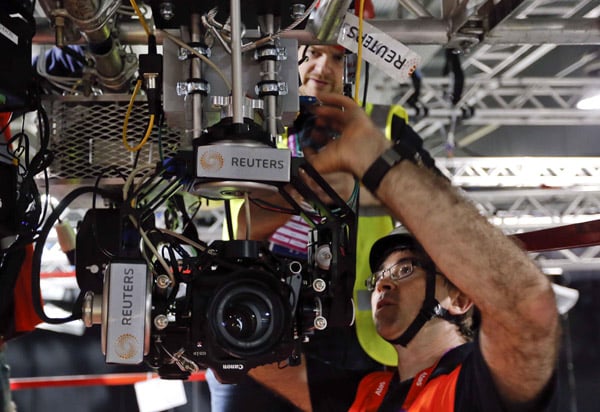 Sports photographers use a variety of techniques and gear to shoot from different angles that are less accessible to the photographers during action: wirelessly triggered cameras mounted behind backboards, perched on overhead catwalks, clamped on the ground. Reuters photographers Fabrizio Bensch and Pawel Kopczynski decided to take the technology of remote photography to another level for the upcoming 2012 Summer Olympics with robotic cameras. In addition to taking and transmitting photos wirelessly, the robotic cameras allow photographers to control camera movement and lens zoom with a joystick. While the photographer is not physically present behind the camera, he still controls the shot remotely. This is no spray-and-pray or automated system. The new gear has already gotten a test run at the World Athletics Championships in Daegu, South Korea and at the world indoor athletics championships in Istanbul, Bensch wrote on the Reuters Photographers Blog. Reuters will debut robotic cameras designed for the elevated roof position in London for the 2012 Olympics.