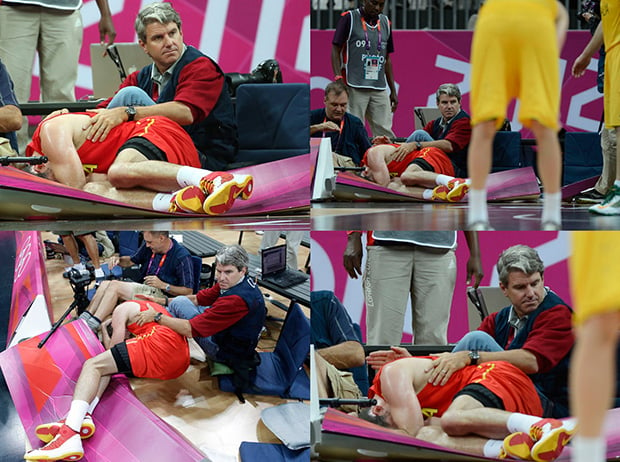 Sports photographers sitting close to the action occasionally take a beating when athletes leave their field of play. This happened yesterday to Reuters photographer Mike Segar while he was shooting the Olympic basketball game between Spain and Australia. While trying to dive for a loose ball, Spain’s Rudy Fernandez slammed into Segar and injured his head. Segar has written up an interesting post on what it was like to suddenly find the cameras pointed at him:

As the smoke cleared and I looked up, Fernandez was basically lying in my lap head down eyes closed. He rolled forward slightly, moved his hands to his head, moaned loudly and stopped moving. He was in my lap, clearly injured on his head. I could see blood on his fingers on top of his head and apparently he was now unconscious for a few seconds, or nearly so. At this point I was not a photographer. I suppose I just kind of instinctively rubbed his arm and shoulder, kept my hands on his back and held him a bit and said “stay still, stay still man… You’re all right.” I didn’t actually know if he WAS all right at all, but all I could do was to try to comfort him for the 20 or 30 seconds it took the Spain trainers, players and staff to rush to his aid. Anyone would do the same for anyone else injured in their lap, right?

I looked up and realized that fellow photographers and TV crews were shooting the incident from all possible angles. I was in the center of this wreckage but I was not really hurt. A camera with a wide angle lens was somewhere in the strewn mess of my equipment at my side and for a moment I thought to try to find it and take pictures, but with Fernandez lying bleeding on my feet and me the only one trying to help a bit, that wasn’t going to happen.