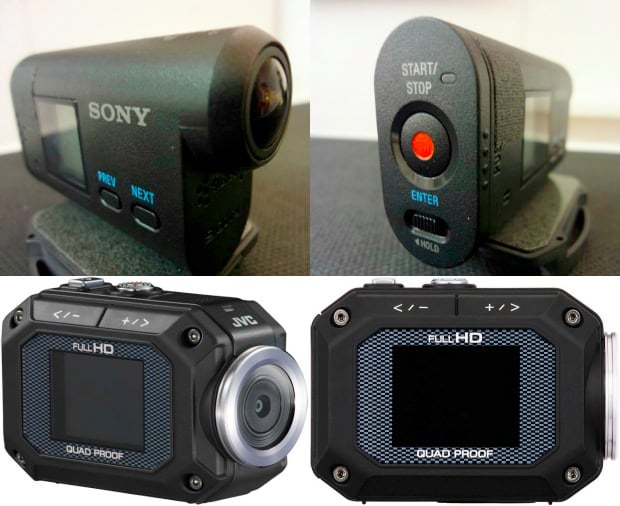 Where the action cam market is concerned, GoPro is king. For the last few years if you wanted to go sky diving, snowbording, mountain biking, or any other extreme sport and video tape yourself doing it, you’d probably be strapping a GoPro to one of your appendages. Sony and JVC, however, are looking to get in on some of the extreme sports action — and both are doing it in style with new action cam offerings.

Although both are quite small, neither of the cameras are quite as small as GoPro’s Hero2, but what they lack in tini-ness, they’re trying to make up for in either ruggedness or features. For its part, JVC’s newly announced GC-XA1 Adixxion offers, and we quote, “un-matched versatility out of the box.” By that JVC means that you won’t have to buy a WiFi adaptor, waterproof case, or many other accessories because all of those things are built-in, and for a reasonable $350 price tag to boot.

On the other hand, Sony’s action cam, which the world was offered a sneak peek of earlier this week, will need you to buy the waterproof casing, and as far as we know it isn’t freeze proof or dust proof or other things proof without it like the JVC. What the Sony does have, however, is impressive technology built in for higher quality video than you’re used to seeing out of action cams. Although little is known about the camera, we do know that the camera will be sporting an Exmor R CMOS sensor, ultra-wide angle Carl Zeiss optics, and Sony’s SteadyShot image stabilization.

The JVC will be available late summer, while the Sony still has no official release date. And while we’ve yet to see these widely used in the real world (JVC does have a sample video up), GoPro should probably look out, some new kids are going to be joining it on the action cam block, and they’re no push-overs.