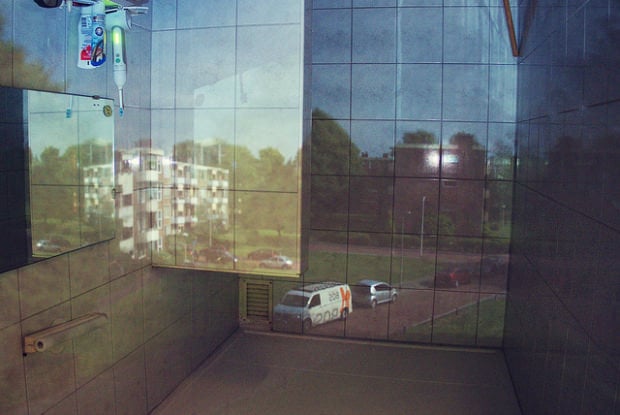 The camera obscura has been around for a long time (Middle Ages long) and typically consisted of a box or room with a hole in one side through which an image of its surroundings could be formed. As you can see from the example above, any room — in this case a bathroom — can be turned into a camera obscura given a small enough “aperture.” Unfortunately, most rooms have big, blaring windows that let in too much light, and the only image formed on the opposite wall is a shadowy blob.

In the name of forensics, however, Antonio Torralba and William Freeman from MIT have discovered a technique by which they can turn any windowed room into a camera obscura, using a couple of stills of the room to magically gather an image of the outside world.

You’ve probably seen similar things done in TV crime dramas before (enhance!), but this is one case where CGI may have to make room for reality. All they need is two images of that blob of shadows on the wall, one of which has an object placed in front of the window to block out some of the light. After that they can use software to analyze the images and significantly sharpen the projection into a distinguishable picture of the world outside that window.

The forensic implications are vast, and could even include helping to locate hostages using two stills from a video of the victims. But whatever the uses end up being, it looks like the camera obscura is making a comeback.

(via New Scientist via Engadget)

The Rise of Pro Birth Photography