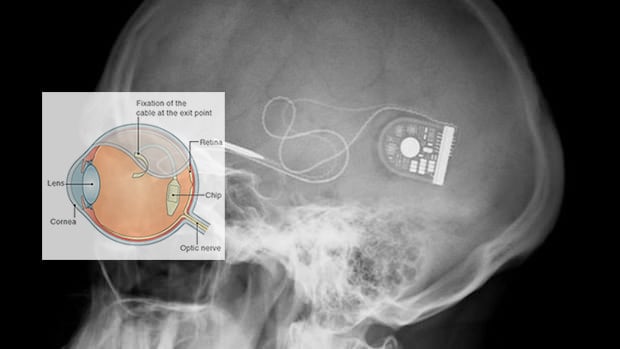 Image sensors and the advent of digital imaging have been met with differing reactions from the photographical community. But what a team of doctors at the Oxford Eye Hospital have managed to do with the technology is 100% digital, and 100% amazing. Clinical trial leaders Robert MacLaren and Tim Jackson have helped two blind men to partially see again.

This miraculous feat was achieved by implanting a 3mm square, 1,500 pixel sensor at the back of each eye; the sensors are then connected to the patient’s optic nerves and a control chip implanted behind their ear. The sensor, which was developed by the German company Retina Implant AG, can then send signals down the optic nerve to the brain each time it detects light.

At this point the two formerly-blind patients, Chris James and Robin Millar, can only perceive light and some basic shapes; but as more time goes on the hope is that each patient’s brain will begin to better interpret the signals coming from the implant.

Of course the treatment is still in its very early stages, but this could eventually mean significantly improved, black-and-white vision for people who have lost the ability to see entirely — a bonafide miracle. And none of this would be possible without two 0.0015 megapixel image sensors.