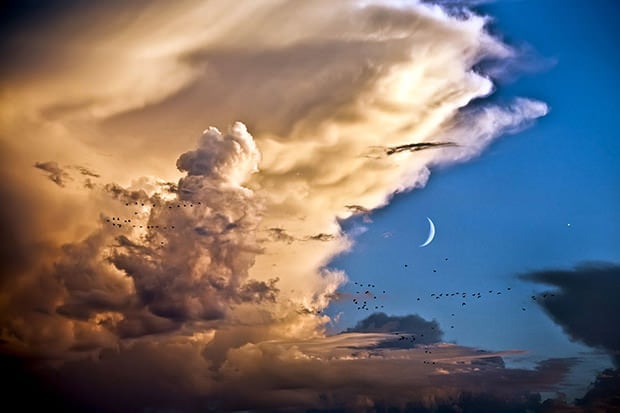 Photographer Isaac Gutiérrez Pascual of Spain shot this beautiful photograph of the sky that contains four different subjects: birds, clouds, the Moon, and Venus. It was shot using a Canon 5D and a 70-200mm f/2.8L IS lens. NASA writes,

[…] a crescent Moon and the planet Venus, on the far right, were captured during sunset posing against a deep blue sky. In the foreground, dark storm clouds loom across the image bottom, while a white anvil cloud shape appears above. Black specks dot the frame, caused by a flock of birds taking flight. Very soon after this picture was taken, however, the birds passed by, the storm ended, and Venus and the Moon set.

NASA liked the image so much that it even considered using the photo as a backdrop for a group portrait of the International Space Station crew (they ended up choosing a different one).

(via Isaac GP via APOD)

Image credit: Photograph by Isaac Pascual and used with permission

Make Your Own Rolling Camera Bag for $30 Using Padded Inserts