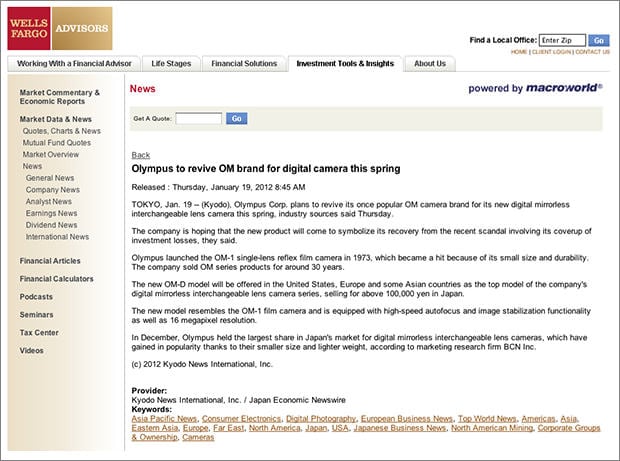 Wells Fargo Advisors is becoming a pretty reliable source for news regarding cameras before they’re actually announced. Just weeks after the Fujifilm X-Pro1 and Nikon D4 were announced early by the service, the soon-to-be-announced Olympus OM-D camera is now semi-official as well. The wire confirms that Olympus will be reviving its old OM brand for SLR cameras through a new line of mirrorless interchangeable lens cameras, and that the camera will sell for over ¥100000 (~$1300) in Japan. It also states that the new camera will resemble the Olympus OM-1 film SLR camera — originally launched in 1973 — and be equipped with high-speed autofocus (rumored to be the fastest of all mirrorless cameras) and image stabilization.

Update: To clear up any confusion: Wells Fargo Advisors doesn’t write the news, but simply publishes press releases received from a third party. In this case, the press release wasn’t published before it was supposed to — it’s simply a Japanese news source confirming that it had also heard about the new camera and upcoming announcement.

Turn Your Old Point-and-Shoot Camera Into a Creative Nightlight

Photo of the Costa Concordia Shipwreck Captured from Space