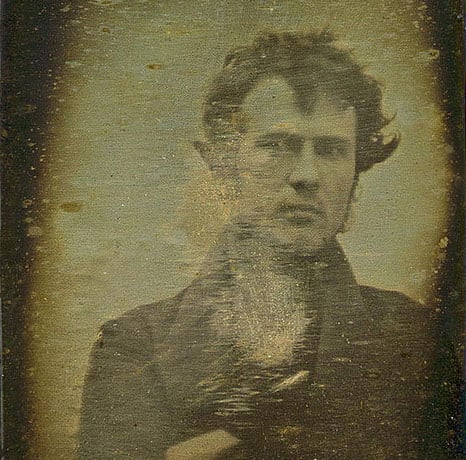 In 1839, a year after the first photo containing a human being was made, photography pioneer Robert Cornelius made the first ever portrait of a human being. The Daily recently published an interesting piece on Cornelius’ story:

On a sunny day in October, Robert Cornelius set up his camera in the back of his father’s gas lamp-importing business on Chestnut Street in Center City, Philadelphia. After removing the lens cap, he sprinted into the frame, where he sat for more than a minute before covering up the lens. The picture he produced that day was the first photographic self-portrait. It is also widely considered the first successful photographic portrait of a human being.

[…] the words written on the back of the self-portrait, in Cornelius’ own hand, said it all: “The first light Picture ever taken. 1839.”

The photo is now a part of the Library of Congress’ Daguerreotype collection.

The History Page: Father of the ‘candid’ (via Gizmodo)

The Definition of ‘Photographer’ According to Urban Dictionary

Portraits of People’s Lives by Looking Inside Their Refrigerators