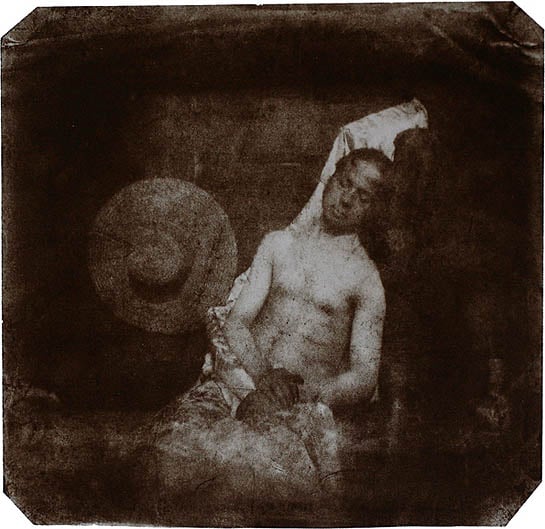 The mid-1800s was a busy time for photographic firsts. In 1838, daguerreotype inventor Louis Daguerre captured the first ever photo of a human being. One year later, in 1839, photograph pioneer Robert Cornelius stepped in front of his camera and created the first self-portrait. 1840 held yet another interesting development: the first hoax photograph.

After developing his own direct positive printing process, Bayard was convinced by François Arago to hold off on announcing it to the French Academy of Sciences. Arago was perpetual secretary of the Academy, a friend of Daguerre’s, and the first person to be given a demonstration of the daguerreotype. The delay caused by Arago allowed Daguerre to beat Bayard to the punch, publicly unveiling the daguerreotype process at the Academy on January 7, 1839.

Bayard did eventually report his own process to the Academy in 1840, but it was too late. Daguerre had gotten the monumental “first,” and all Bayard received from his contribution was some money to purchase better equipment.

To protest the injustice of Arago’s conflict of interest, Bayard went and created the first hoax photo (seen at the top of this post). It was titled “Self Portrait as a Drowned Man,” and was meant to make people believe that he had committed suicide. On the back of the photo was this statement:

The corpse which you see here is that of M. Bayard, inventor of the process that has just been shown to you. As far as I know this indefatigable experimenter has been occupied for about three years with his discovery. The Government which has been only too generous to Monsieur Daguerre, has said it can do nothing for Monsieur Bayard, and the poor wretch has drowned himself. Oh the vagaries of human life….! … He has been at the morgue for several days, and no-one has recognized or claimed him. Ladies and gentlemen, you’d better pass along for fear of offending your sense of smell, for as you can observe, the face and hands of the gentleman are beginning to decay.

Luckily for photography, Bayard didn’t kill himself. He would go on to contribute a good deal to the young medium over the remaining 50 years of his life. He helped found the French Society of Photography, and invented what became known as combination printing.

Thanks for the tip, Dizono!