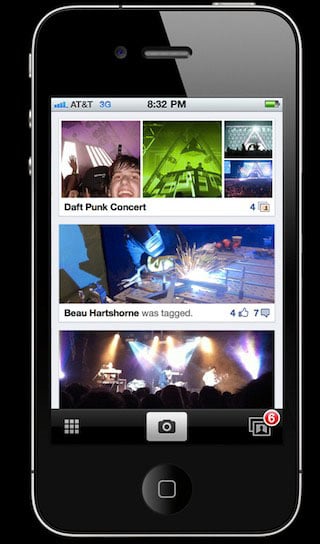 Mobile photo sharing star Instagram just announced its 5 millionth member and will soon pass 100 million photos, but their domination of the market may not last much longer. According to TechCrunch, Facebook — a service that receives 6 billion photos a month and stores 100 billion photos total — is currently working on a feature-packed iPhone app that may soon be ubiquitous on iPhones.

The information comes from 50MB of images and documents leaked to the blog, and TechCrunch says that the app can be described as Path meets Instagram meets Color meets With. Unlike the legions of photo sharing apps struggling to capture users, Facebook can simply tap its 600+ million users to instantly dominate the market — much like it did with photo sharing on the web.

Update: TechCrunch has just published a large number of screenshots showing the app in action.