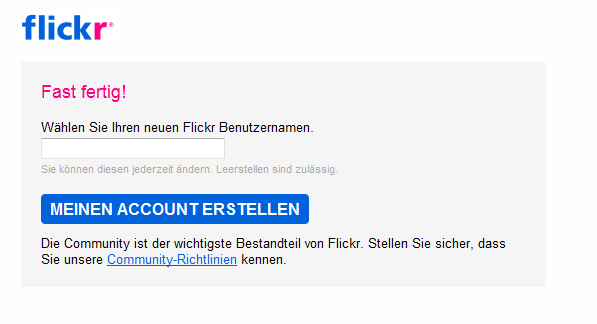 When Mirco Wilhelm tried to log into his Flickr account yesterday, he was surprised to find that his 5-year-old Pro account with roughly 4,000 photographs had completely vanished. It then dawned on him that only a week earlier he had reported another account for posting stolen photographs.


He immediately contacted Flickr asking if they had deleted the wrong account by mistake, and received the following email:

Unfortunately, I have mixed up the accounts and accidentally deleted yours. I am terribly sorry for this grave error and hope that this mistake can be reconciled. Here is what I can do from here:

Please let me know if there’s anything else I can do.
Again, I am deeply sorry for this mistake.

So basically, Flickr accidentally cast their permanent account deletion spell on the innocent account rather than the guilty one, and there’s nothing they can do except offer four years of Pro membership as an apologetic gesture.

The fact that all account deletions are permanent (and often without warning) has been a lingering issue for quite some time now, but it appears that Flickr is finally addressing the problem — they’re working on making deletions easily reversible.

Flickr has been sending out the following statement to various news sites reporting on the story:

Yesterday, Flickr inadvertently deleted a member’s account. Flickr takes user trust very seriously and we, like our users, take great pride in being able to take, post and share photos. Our teams are currently working hard to try to restore the contents of this user’s account. We are working on a process that would allow us to easily restore deleted accounts and we plan on rolling this functionality out soon.

It’s good that Flick realized that this broken system needs to be fixed, but it’s sad that even one user had to lose 5 years of work for it to happen.

You have to f**king kidding, Yahoo! (via Thomas Hawk)

Update: Turns out Flickr was able to restore Wilhelm’s account, and then gave him 25 years of pro membership for the mistake. We wonder though — would they have done anything if this hadn’t become a PR nightmare for the service? What about all the people who have had photos “permanently” deleted in the past? (Thanks Eugene!)