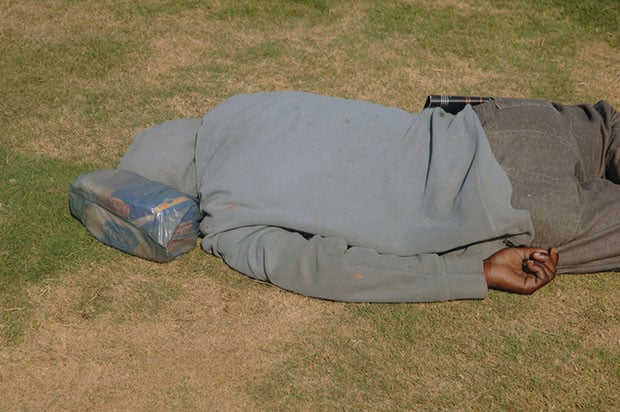 The image, which shows a man asleep in a park just off the Golden Mile in Durban, was described by judges Nick Galvin, Bruno Ceschel and Diane Smyth as both surreal and disturbing, and was picked out from 338 other entries because of its quiet, enduring intensity. “The more I look at it, the more powerful it becomes,” commented Galvin, who manages the archive at Magnum London.

The announcement prompted quite a bit of activity in the comments. Here’s a selection:

Wait, what? This is about as powerful as my pinky finger. Is this a joke/hoax?

Is this some sort of joke? I’m afraid this is a terrible picture of poverty. You people really do need a reality check. What planet are you on?

I’m not gonna beat around the bush. The image is rubbish and says nothing at all about poverty.
If this is what is judged to be a great photograph then one has to ask who the hell was doing the judging?
Considering the thousands of breath taking photos, taken this shouldn’t even be on the list.
Like most photographers, who make a living selling their work that photo would not even be downloaded from my card had I taken it.
Utter crap.

Looks like a Flickr “pro” image to me!
No wonder the business is going west..The public perception must be (in reality) “hey is that a winning image?..
Geee I can do that” And thus one more six inch nail gets rammed into the coffin of professional photography…
Makes me seeth :-)

Photos such as this mock photography, erode its credibility, and do a terrible disservice to those photographers who put real skill and effort into their work.
This is nothing more than a happy snap of a lunchtime sleeper, one of thousands you will find all around the world at midday. Disturbing? Gimme a break!

What do you think of this photograph?

Update: One of the judges has posted a response to the criticism.

Jumping Out of One’s Skin with Creative Light Painting