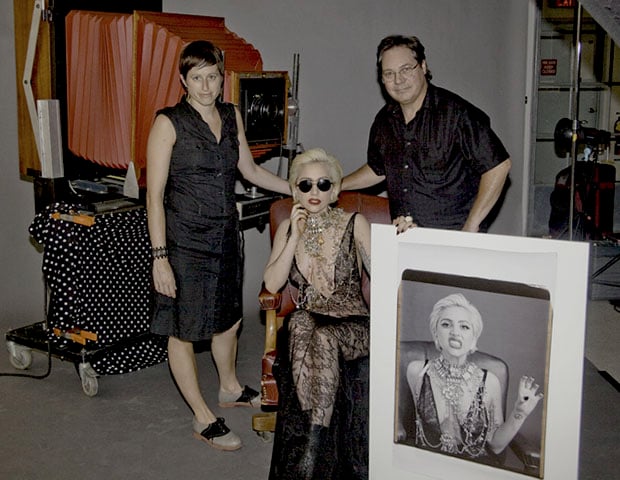 Meet the 20×24 Polaroid Land Camera, a mythical beast in the world of large format photography. Polaroid’s founder Edwin Land created only seven of these 235-pound cameras over thirty years ago, and only six exist today. Two of them are on display at Harvard and MIT, and only four are in use commercially. According to Forbes, buying prints created with this beast cost $3,500 a piece, while renting the thing for a day costs $1,750 and $200 for each shot. Back in June, an Andy Warhol photo shot with the camera sold for a quarter of a million bucks.

As Polaroid began its slow demise in the 2000s, Polaroid research photographer John Reuter met several times with a man name Florian Kaps to discuss how they would attempt to save Polaroid’s instant film. Reuter wished to continue the 20×24 line, while Kaps was interested in saving everything else. In 2008, Reuter and a group of investors to created 20×24 Holdings LLC. and purchased two of the 20×24 cameras and the remaining supply of 20×24 film for a cool $5 million. Kaps created The Impossible Project and set to work reviving the other Polaroid lines. The rest is history.

20×24 film now lives on through Reuter’s 20×24 Studio, located in Tribeca, NY. New 20×24 film can be ordered from the studio, and they project half a million in revenues this year.

Here’s an interesting video showing this camera in action:

The photographer is Elsa Dorfman, a Cambridge, Massachusetts-based portrait photographer known for her work with this camera.

Image credit: Photograph by 20×24 Studio and used with permission

A Day in the Life of the MIT Community