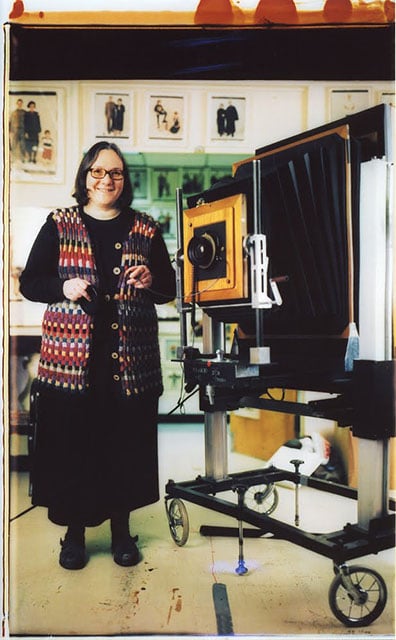 Of the 6 existing Polaroid 20×24-inch cameras, one has long been in the possession of Cambridge, Massachusetts-based portrait photographer Elsa Dorfman. After more than 3 decades of shooting portraits of some of the world’s best-known faces, Dorfman has decided to retire from photography.

90.9 WBUR, Boston’s NPR station, reports that the 78-year-old photographer is planning to take her last shots and then take time to reflect and organize her vast collection of work.

Dorfman began shooting with the legendary 240-pound Polaroid camera in the early 80s after Polaroid trained local photographers in using it. She reportedly leased her camera for so long that she could have purchased 3 of them outright with the money she eventually paid out.

The photographer was able to continue shooting Polaroid film after the company’s demise by stocking up in 2008. The Boston Globe says she “hoarded” a year’s worth of film after seeing the demise approaching. WBUR reports that Dorfman persuaded a friend to purchase 550 cases of instant film — the entire supply that was in existence for these cameras at the time.

Half of that supply is left, but Dorfman is now turning her attention to getting her body of work straightened out.

“I’m a terrible curator, not everything is signed or dated. My records are terrible, so there’s plenty that I can do,” she tells WBUZ.

Sony Will Be the Major Player in the Photo Industry, Says Sigma’s CEO

45,000 Drones Registered Despite Reports of Glitches in the Online System