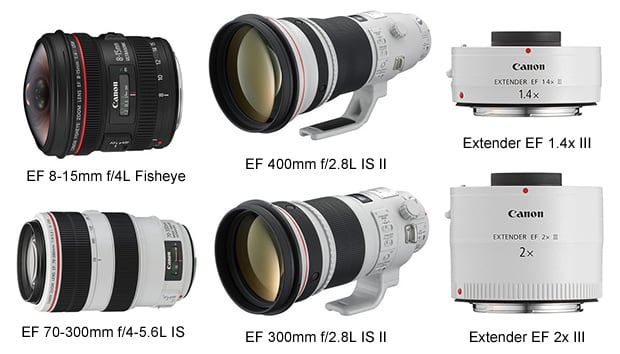 The new 70-300mm is interesting not because Canon upgraded its 70-300mm lens, but because they decided to turn it into an L lens. Various reviews online have said that the old 70-300mm IS had L quality glass, and now Canon decided that it officially does. The older 70-300mm lenses offered 3 stops of image stabilization, while this new one supposedly offers 4. Too bad the lens still has a variable maximum aperture. It’ll be available in October for $1,500 (seems too high).

The 300mm and 400mm lenses and extenders are a bit less interesting to us. They’ve mostly received standard improvements such as less weight, better optics, superior image stabilization, faster focusing, etc… The 300mm and 400mm lenses will be out in December for a cool $7,000 and $11,000, respectively. The extenders offer better focusing and optics, and will be available in December as well for $500 each.

What are your thoughts on these new lenses?